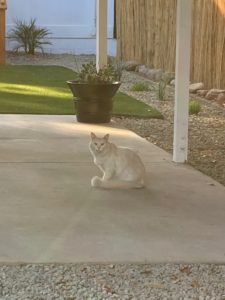 I think you know what I mean…we accidentally step on the cat’s tail or paw when she’s underfoot. Breaks my heart! Your cat tumbles off a table and looks at you like it was all your fault. She won’t even let you comfort her. She hides from you and runs from you when you try. She acts like she hates you when you attempt to trim her claws or cut out a mat or untangle her from a fix she’s gotten herself into.

Last week I became panicky when I couldn’t find 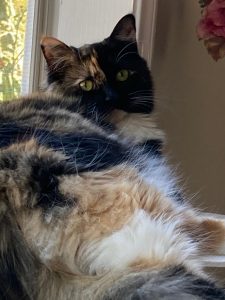 Olivia. Well, it happens, hence the title of her latest book, “Where’s Olivia?” But truly, I got up in the morning and Olivia was not on the bed with me. She did not come to greet me. She was not in any of her usual places. Where was Olivia? I searched the same places twice, thought of new places where she might be and searched those. Finally, I resorted to closed closets and cupboards. When I opened the hall closet, a ball of calico fur shot out of there like a canon. Oooooohhhhh the pain. Poor Olivia. I felt awful!!!! You know what it’s like. Of course it appeared she blamed me. And yes, I am the one who closed her in there, but I sure didn’t know it until…. Well, until she came bursting out—8 hours later. 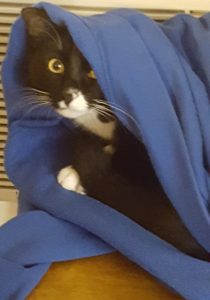 I apologized profusely. I attempted to comfort her. She would not let me near her. I got the evil eye. It wasn’t until late in the day that she would even come near me.

Can you relate? What awful thing have you done to your 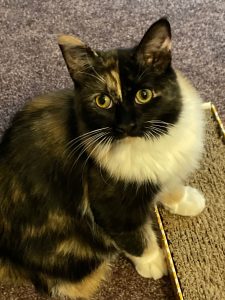 cats that still give you pangs of guilt, even though it wasn’t intentional? Cats blame us for everything, you know. Twice when I moved to new homes, my inside-only Himalayan, Katy, got out and spent the night outside. The first time, I didn’t have a clue. Evidently she found a loose screen and either jumped or fell out of the window. THANKFULLY, the next morning I heard a cat meowing at the front door, opened it, and found 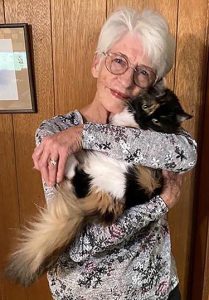 Katy on the porch wanting back in. Bless her. That could have ended horribly.

The second time I knew she’d skittered out while we were moving stuff in and I saw her go under the house. No amount of calling would get her to come out. It was getting dark. I was advised (by a man, of course) to close up the opening and leave her. He said she’d come out in the morning. She did, but I had an awful night thinking of my beautiful, refined, well-bred Himalayan having to spend an entire night under the house with spiders and who knows what else.

Oh the hazards of loving a cat.