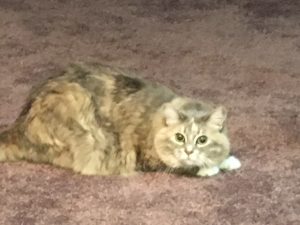 As near as I can figure, it all started with a look between the two cats. Sophie had taken over the couch blankie after Lily had finally left it. Lily had claimed that blankie all afternoon and into the evening, leaving Sophie to curl up on the bare loveseat for her nap.

We noticed Lily staring at Sophie from the 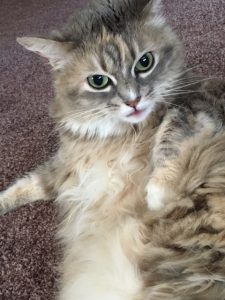 floor as Sophie snuggled happily into the blankie, then Lily disappeared. We didn’t think anything of it. Lily often curls up in my office chair in the evening or she spends time lapping from her water fountain and maybe stares out the patio door hoping to catch a glimpse of a squirrel. But that evening, as we lounged in the living room with Sophie, we heard something in the kitchen. We listened and waited. Suddenly there was a loud clatter and crash. We leaped to our feet and rounded 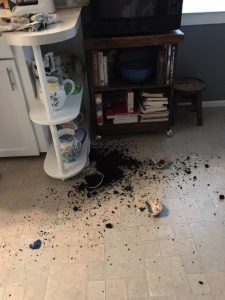 the corner into the kitchen in time to see Lily leap off the countertop and scurry to parts unknown.

Left in her wake was a broken succulent pot in a pile of dirt. The coffee pot had been shoved off the stand, and a pencil holder had also been upset. What a mess. What a surprise. Lily has never done anything this naughty and this clumsy before. Was she leaping for a

gnat? Maybe she was digging in the succulent pot. She wouldn’t fess up to the reasons for her bull-in-a China-shop-behavior, but one has to wonder if it had anything to do with that darned couch blankie.

The next day I pulled another cozy blanket out of the linen closet and draped it over the love seat because it is obvious that our two fur-girls are not going to share. Maybe they’re trying to exercise social distancing.