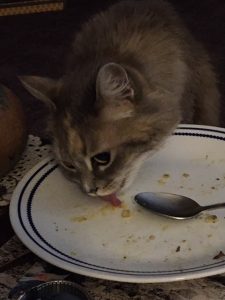 We have two cats with two very different sets of table manners, and I like to think this is a  reflection of their background. Sophie is a dream when it comes to manners. She doesn’t beg for food ever. She doesn’t even like to be seen eating. If she’s eating or drinking water when we walk into the room, she’ll stop and move away from her bowl. Oh, she’s always eager to eat, but not so that she becomes a “stumbling block” in the kitchen. She waits patiently in her spot where we feed her as I prepare her plate. She eats really fast. She finishes her meal in less than half the time it takes Lily 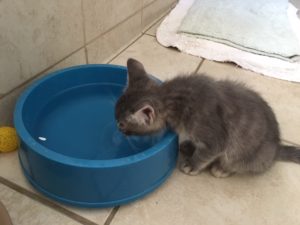 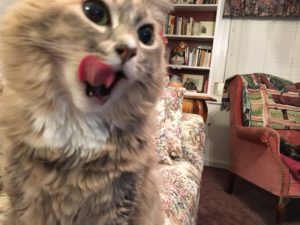 However, if Lily decides to leave her feeding station and go see what Sophie’s eating, Sophie will walk away from her meal and let Lily have whatever is left. I’d say Sophie is easily bullied and this probably comes from her wild beginnings.

Sophie lived on the streets—was probably born there. She was just ten-weeks old when a good Samaritan rescued her and we adopted her. I imagine her approach to food was established back when she was a kitten. She had to be on the alert while eating and if a 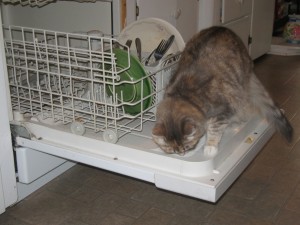 larger cat came around, she’d better relinquish her food or be hurt.

Max, our formerly feral snow-shoe-lookalike, used to carry his food away from the bowl to eat it. Our white odd-eye cat, Winfield, used to scoop water and sometimes food out of bowls and eat or drink it off his paw. If you have multiple cats you know there’s more than one way for a 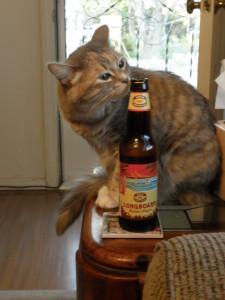 cat to approach his or her meals.

Lily is obsessed with food! This includes her food, Sophie’s food, our food. She can’t seem to get enough food. Anytime she hears cheese of eggs come out of the refrigerator—and believe me she knows the sound—she’s in the kitchen begging. Is this because of Lily’s background? 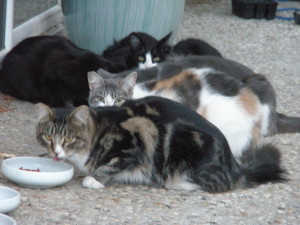 Lily was born in a Volkswagen and moved into an attic with three other families of cats and kittens. There were 15 kittens in all. She may have been the runt of the litter and felt as if she never got enough to eat. Or maybe the kittens suckled from whichever mom was handy at the time and there was a constant fight for a teat. She might have been pushed away from the teat repeatedly by larger siblings and developed a fear that she wouldn’t get enough. Or maybe she was just born a glutton.

Lily is not overweight, nor is she aggressive. She simply wants to be fed three times a day 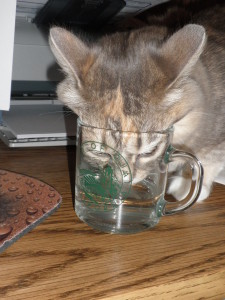 with snacks and she seems to feel entitled to everyone else’s meal as well. She’s a bottomless pit—a little piggy, but she is my piggy and I do love her and, I’m afraid, I contribute to her obsession or fixation.

There are times, however, when I close her out of my office while I eat my lunch. I feel horrible doing that, but she doesn’t seem to mind. When I open the door there’s Lily waiting patiently for me (and my food).

Because of Lily’s insatiable appetite, and Sophie’s generous nature, we feed the two cats at the same time, but in separate areas where they can’t see each other and we keep an eye on Lily, so Sophie can get her fill.

How do you handle your multiple cats at mealtime? Here’s a site that explains a little about cats’ eating habits and how they are formed. Interesting stuff.