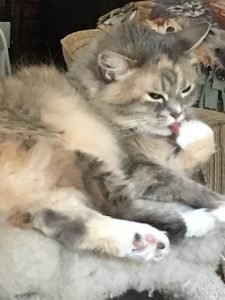 No worries for those of you who love Rags, the partly fictitious cat in my Klepto at Mystery stories. He isn’t ill, but Lily is. We adopted Lily when she was eight-weeks old. We believe she came to us with kidney disease because the symptoms appeared so early. The diagnosis took a while.

When she was four years, she became seriously ill. We consulted with several veterinarians, including a specialist in New York and, with guidance and mostly natural remedies and a switch to prescription food, we got her on the right track again. That’s when we received the kidney disease diagnosis. For six years now we’ve kept an eye on Lily’s kidney values and we’ve carefully monitored her food—mostly prescription. So far so good until this year. Lily is ten. The numbers are starting to go awry and, for the first time since 2009, she’s 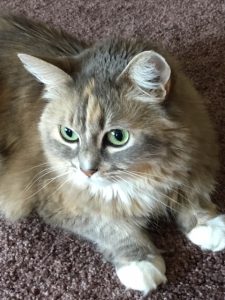 Maybe she was feeding off my emotions at first, or she was simply mad at us because we stuffed her into a carrier and carted her off to the torture chamber (veterinarian) last week, but she seemed lethargic. She started hanging out alone in a different spot and she looked sad. But she never missed a meal—that’s our Lily. 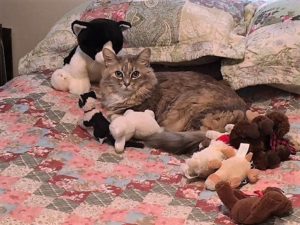 After a couple of days, however, and daily doses of Rescue Remedy and a supplement for kitty kidney patients, Lily is back to being silly and sweet Lily. I know that it will be a series of ups and downs from here on out. And boy am I going to enjoy those ups.

Just now, in fact, Lily and I played a fast 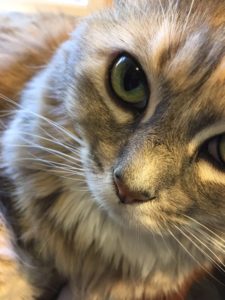 game of “chase the straw tip.” She loves chasing after the tip of the straw when I snip it off so the straw fits in my coffee cup. When I saw Lily sort of lounging around looking bored yesterday, I picked up the stuffed animals she had strewn all over the floor and put them away. Minutes later I heard her announcing her arrival with baby lamb, then her little kitty, soon she brought her hedgehog and polar bear. Yes, she was back—she had purpose. This morning, after our romp with the straw tip, she rewarded me with MY little moose, which does not go in her toy box, but it sits on the piano. No stuffed critter in this house is safe from Lily. And that’s okay with me. It’s when she stops decorating the house with her toys that I’ll go into serious worry mode.