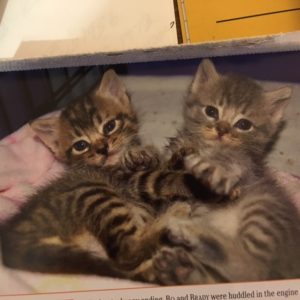 I’ve only raised one set of sibling cats over the years and what a lovely experience. Sibling cats raised together can be wonderful companions. While most I’ve known bond nicely with each other, they still have their own personalities and the beautiful capability to bond with their human.

I love the way siblings will snuggle together when napping. When they play, they’re generally evenly matched and no one gets hurt. They’re at the same stage at the same time, so you don’t have a grumpy older cat growing more and more annoyed at the young whippersnapper.

In some cases, an older, settled cat will readily accept a kitten into the household or an 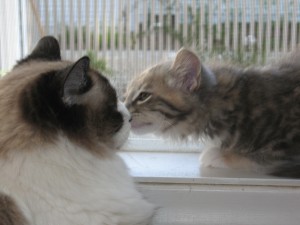 older stray, for example, and they will bond as if they’ve known each other forever. But most of the time the sweet moments between the two cats are few and far between. The older one won’t allow the newby to curl up with him, and he certainly has no time or desire to engage in the new cat’s brand of play—except maybe on rare occasions when no one’s looking.

Our older, grumpy guy, Max, was NOT a happy camper when Lily came to us as a kitten. He never hurt her, unless you consider his rude behavior hurtful. But there were times when I’d catch what I considered 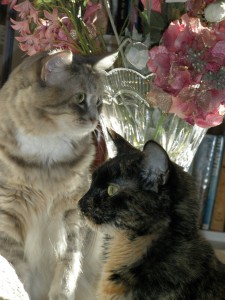 a sweet moment between the two of them and I captured a few of them with my camera.

While Max definitely rejected the kitten and everything about her, Sophie, who was five years old when we adopted Lily, was ready to have a friend. She welcomed Lily as a playmate from day one, but they didn’t snuggle or cuddle. The bond between the two formerly feral cats didn’t seem all that strong—it didn’t appear that they were developing much of a friendship. However, when Lily was injured, Sophie reacted as if she was in mourning. It was as if Sophie knew that Lily was seriously hurting and she became almost grief-stricken in her behavior.

Fast-forward nine years. Max is gone and Sophie and Lily behave, not so much like bonded sisters, but old friends who’ve developed a deep caring for each other. They live their own lives apart from each other except when one of them wants to play—then they come together with gusto and glee.