Thoughts for Thursday – What Did the Cat Say? 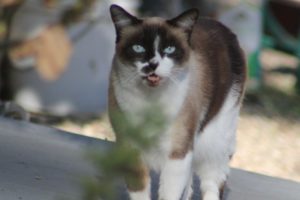 Do you speak cat? Do you wish you could understand what your cat is saying? There are a lot of theories as to why cats are vocal and what they’re trying to tell us. One is that cats do not use their voice when communicating with other cats. They purr and growl, but they evidently don’t meow. Have we taught them to speak?

Often, a cat will start meowing whenever his person is on the phone. Why? Some say it’s 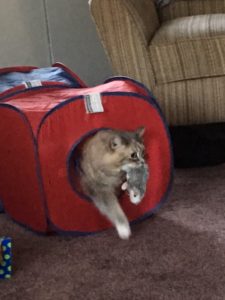 because the cat think the person is talking to them. The cat doesn’t see anyone else in the room, you must be talking to her.

Why are some cats so much more vocal than others? Evidently breed has a lot to do with it. Cats with Siamese background can be chatty. There’s a little part-Siamese cat in our neighborhood who certainly lives up to her chatty reputation. The more you talk to her the louder and more talkative she becomes. It’s charming, but I wouldn’t like to have such a vocal cat in my house 24/7.

Our tortie, Sophie, is a quiet cat by nature, but she meows frantically whenever Dennis goes outside. He’s her person and she doesn’t like it when he’s out of her sight. She claws at the door and meows until he returns. This is not the case if he drives away in his car, but only if he goes out into the yard. It could be that she’s telling him to bring her some grass. 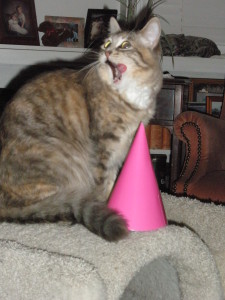 Because of the drought, we no longer have a lawn, but an occasional rain will bring a few weeds. Once several months ago Dennis caught Sophie nibbling on a houseplant. He reprimanded her, then went out and found a bit of devils grass for her. When she cries and carries on about him going outside, he sometimes brings her another piece of the weed. So that could be why she cries for him, she’s yelling at him to bring grass.

Last week I walked up the steps to a quaint feed store here in town where I get my kitty litter and was greeted by Sterling, the shop cat. She walked across my path meowing and meowing. Of course, I stopped and greeted her. Then I saw what she must have been trying to tell me about. There was a dog in the store. I think his name was Hank. The employees were fawning over Hank—a rather large lab—and they were feeding him treats. I think Sterling was complaining about the fact that Hank didn’t even work there and he was getting all of this special treatment. Cute.

Lily speaks when she brings me one of her stuffed toys. Out of the blue I’ll hear her announce loud and clear that she has captured a stuffed bunny or bear or moose and she’s bringing it to me. She doesn’t talk much, but occasionally, she’ll look at me and meow. I respond, “I love you, too.” Then I realize that she might have been saying, “Get up—I want that warm spot on the sofa,” or “I’m hungry—what are you going to do about it?”

If your cat could talk, what would you like to hear him say?