Thoughts for Thursday – How Smart is a Cat, Anyway? 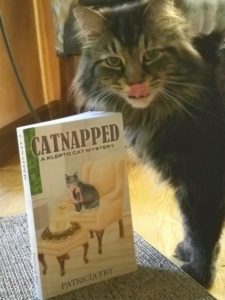 Here we go again with the “my cat’s smarter than your dog (or hamster or chicken or monkey)” controversy. Actually experts have taken the time and used some of their expertise to study this issue and cat lovers might enjoy reading some of the results.

The fact is that some cats are pretty smart. They can learn to open cabinets and doors, turn of lights, use the toilet, ring the doorbell and play fetch. One cat in one study designed to teach cats to move cardboard boxes around,  even used one of those boxes to create a stool so he could reach a tidbit of food. Yes, according to studies, cats can learn and they can figure things out.

In one study, cats were found to have greater recall by far than dogs, even monkeys. Cats, 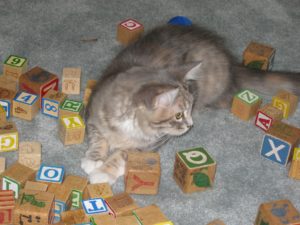 for example, when having been shown where the treats were, remembered this for 16, whereas the dogs’ recall lasted for a mere five minutes.

Some even say a cat has the intelligence of a two- or three-year-old child.

So which cat breeds are the most intelligent? According to some studies, it’s the Siamese, European Burmese, Burmese, Abyssinian, Cornish Rex, Singapura, Turkish Van, Bengal, Scottish Fold, Tonkinese, and your cat, of course. Here’s a link that explains why.

I like this site as it describes details of some of the studies and results related to determining the intelligence of a cat. http://catsinternational.org/the-intelligent-cat/