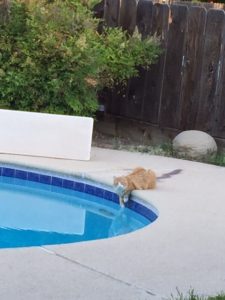 Yesterday we talked about adventuring cats. In the past, I’ve featured cat breeds that tend to like water, such as the Turkish van, Turkish angora, Maine coon cat, Abyssinian, and Bengal. But have you ever seen a cat love…I mean absolutely love swimming in the ocean? Or is it his people that he loves so much? This video is amazing to watch. You’ll fall in love with this little black kitty named Nathan and marvel at his lack of fear—even of ocean waves and the feel of water on his fur. Here

Any cat and all cats can swim, but most of them don’t want to. They will, however, when they have to, like this poor cat who was caught up in the flooding caused by Hurricane Harvey last year. He’s swimming for his life and he doesn’t look very happy about it. here

Some cats actually like water and will play in it, but not too many will allow themselves to 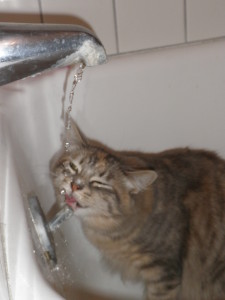 get wet. Here’s a picture of a Munchkin who delighted in taking a shower with his human when he was a kitten.

Lily loves—I mean LOVES water. She drinks a lot of it and she doesn’t mind getting her face sprinkled while lapping water from a spigot. But let me accidentally make a splash in the kitchen or bathroom that results in a few drops landing on her fur and she does the shimmy all the way to the back of the house. 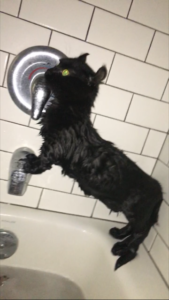 Our odd-eye white cat used to drink water with his paw. He’d dip his paw into the water bowl and lick the water off his paw. That’s how he drank water. After he tipped his plastic and metal water bowls over several times doing this, we switched to heavy pottery bowls designed for feeding and watering rabbits. That worked.

Would you like to teach your cat to like having a bath or romping in the water? Good luck. Most experts say that a cat either likes getting wet or he doesn’t. So if you dream of swimming with your cat, you’d better adopt one who already shows signs of being a water-kitty.

This entry was posted in About Cats, Funny Cats, Interesting Pets. Bookmark the permalink.