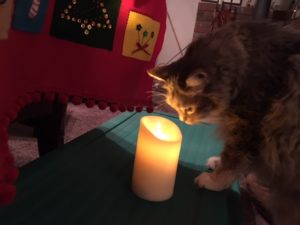 As most of you know we’ve been dealing with fire and smoke here in Ventura County. And this has affected many, countless animals. It’s still affecting some. Pets and large animals are still displaced in some areas and being temporarily evacuated in others where the fire is approaching. I received a newsletter from our local raptor center this week saying that they had to evacuate all of the raptors at one point. The facility was spared, but they now realize some of the items they need to acquire in order to keep the birds safe. As I understand it the raptors and injured/ill birds are all being housed in the hospital for now until the smoke sifts out of the valley.

Air quality is awful right now and many animals with health issues are wheezing and experiencing irritated eyes, for example. Dogs probably shouldn’t be taken on extended walks right now. Not only is the air quality bad, there’s ash everywhere and, as I heard someone at the veterinarian’s office say the other day, “Dogs walk with their noses.”

Fire is not a friend to the household pet. In our house, I’ve even banned candles. I love lighted candles, especially around the holidays. And I used to treat myself to them with caution of course. I lighted them only when I was in the room so I could watch the cats. Cats, as you know, are curious and will try to sniff and paw anything they find interesting, even a candle flame. They could knock the candle over, put their paw in hot wax around the candle. Sometimes they’ll sit close to a burning candle for the warmth and catch their tail on fire. It happens. It has happened and it will happen again if you allow it. There’s at least one report of a cat knocking over a candle and burning the house down.

So I’ve given up flame candles. I will place scented candles around just for the scent, but I no longer burn them. This time of year, however, I decorate with battery operated candles. It’s a safer way to attain the ambiance I enjoy. I suggest that, if you have cats, consider investing in some of these truly real-looking candles this year instead of risking everything to decorate with real flames.

This entry was posted in About Cats, Cat Safety. Bookmark the permalink.