New Review for The Perilous Purrsuit.

Michele, at Miki’s Hope has posted her review of my 26th Klepto Cat Mystery, A Perilous PURRsuit. Check it out here:

http://www.mikishope.com/2017/12/book-review-perilous-purrsuit-klepto.html See all of the Klepto Cat Mysteries and the hundreds of reviews they’ve acquired here: https://www.amazon.com/s/ref=nb_sb_ss_c_2_14?url=search-alias%3Dstripbooks&field-keywords=klepto+cat+mysteries&sprefix=klepto+cat+mys%2Caps%2C199&crid=2HLR83O85K1O7 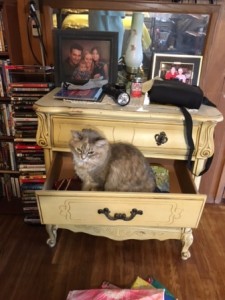 Cats are survivors. Or so it seems. We hear of cats finding their way back home when being uprooted and showing up at the new home when left behind. Cats will sometimes leave a home that isn’t working out well for them—the family adopts a dog, a catastrophe has displaced her, etc. I met a cat once in Santa Barbara who must have run from a horrendous wildfire they had one year. My friend said the beautiful Himalayan showed up at their door several days after the fire exhausted and with singed fur. After an attempt to find his owner failed, my friend decided to keep the cat and a beautiful relationship blossomed.

When we read stories of cats who have survived things like a ten-story fall, being shot in the head, taking a 400-mile trip clinging to the underside of an 18-wheeler, falling into a trash compactor, we can easily understand why cats are thought to have nine-lives.

Have you known a cat who lived despite an indescribable accident? I know of one cat who 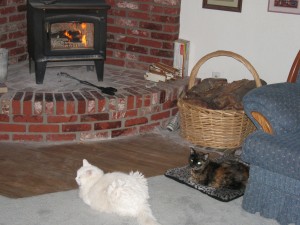 was shaved to the skin when he was caught up in the engine of a car. Just recently, I read the story of a litter of very young kittens who were caught in a weed-whacking accident. Thankfully the gardener realized he’d invaded a hidden litter of kittens and he rushed them to a veterinarian where they were treated. One lost an eye, one lost an ear, but they all survived and are thriving.

What is it that causes a kitten or cat to endure a serious CATastrophe? One source says cats are thought to have 9-lives because they are more tenacious of life than most animals. They are built to withstand falls, for example. They’re stealth, athletic, agile—even graceful. They’re resilient. And cats seem more willing to take risks.

But where did the notion that a cat has 9-lives actually come from? Did you know that in medieval Europe, they used to toss cats from a 70-foot tower as some sort of ritual? Most times, the cat would hit the ground running and skitter off never to be a victim of this torture again. The fact that the cat survived helped to create or foster the 9-lives concept. They actually used a live cat in this ceremony until 1817. Then they began using toy cats—stuffed cats. Holy cow—cats have been through a lot, haven’t they?

I don’t know about you, but I think it’s time to go snuggle with my sweet kitties and apologize for the sins of my ancestors.