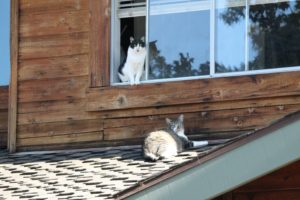 Just in time to share in this post, Michele, at Miki’s Hope has posted her review of CATalyst for Clues. As some of you know, in this story, Rags is a runaway cat. Check it out here: http://www.mikishope.com/2017/11/book-review-catalyst-for-clues-klepto.html

How many ways can a cat escape? I hope Rags and I never run out of ideas, because his escapes and resulting escapades are what keep fans coming back for more of my Klepto Cat Mystery stories. I’m sometimes afraid the authorities will eventually come down on me for allowing my fictitious characters to be so lackadaisical where their fictitious cat, Rags, is concerned. However, every time Rags’s people discover one of his escape routes, he finds another one. No matter what they do or how much they trust him, he manages to go adventuring.

If Savannah and Michael ever do find a way to keep Rags contained, the Klepto Cat 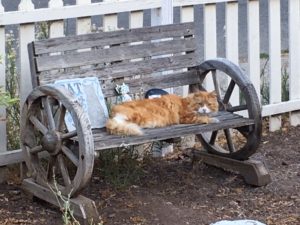 Mysteries would certainly lose their edge of suspense and mystery.

So, rather than trying to find new ways to secure Rages, I’ll continue to work on sharpening his curiosity and cleverness as he continues to discover opportunities and avenues giving him access to the world beyond.

In the new story I’m working on, Rags ramps up his skills and instincts to new levels as he inadvertently saves a beloved pet, expertly solves a long-forgotten mystery, and is the catalyst that shields his family from extreme danger—all because he’s such a darn good escape artist.

Do you have a cat that MUST go out? Most cats can be house-trained. That is, they can become inside only cats and be happy in an enclosed environment. But I’ve known a few who absolutely had to have access to the outdoors. Smokey, my mother’s cat, which is also the cat I’ve patterned Rags after, is one of them. As a kitten, even though he had access to a large home and a kitty door into the garage that had interesting climbing apparatus for him, he insisted—I mean INSISTED on going outside to explore and roam.

A cat I adopted from our local shelter, Dinah, had the same desires. She even refused to use the litter box. She never had an accident inside, but she could sure hold it until someone let her out. She’d even go out in the rain to do her job, while we waited at the door to let her right back in.

Would I bring home another inside/outside cat? Not if I can help it. The indoor/outdoor cats I’ve had did not live as long as those I keep inside only. Those neighborhood cats I see outside my windows are looking rougher around the edges the longer they’re allowed out. And there’s the worry. My mother constantly worries about Smokey’s whereabouts. And she keeps him inside more and more often.

Here’s a good site that gives tips for keeping your outdoor cat happy and healthy. 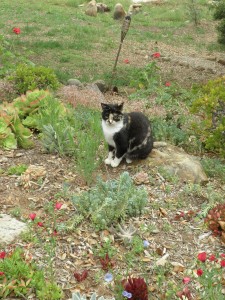 One source says that indoor cats can live to be 17 years old. But statistics show that outdoor cats live an average of two to five years. So far so good with Smokey (and Rags). Mama just turned 96 and still lives at home. Smokey has reached the ripe old age of eight and he still looks good. She’s dodging bullets so far. But then, as he ages, he spends more time inside. And he’s never out over night.