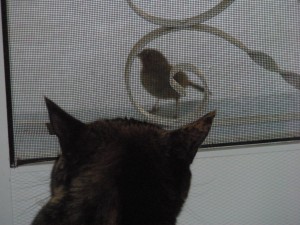 Most animals have enemies. Think of those attributed to the cat—dogs, coyotes, large owls, hawks, eagles, raccoons, wolves, and some other cats… But are these really natural enemies for all cats? Do cats naturally hate birds, lizards, mice and other rodents? Probably not. Cats are some of the most discerning animals around. They hunt when they must—for survival and sometimes for sport. They can get mighty angry at a squirrel or a blue jay that taunts them. Certainly, outside cats had better be wary of renegade cats and dogs as well as larger wild animals. But cats have also been known to make friends with some of these critters.

Our cats live inside, so they don’t come in contact with other cats. Of course they’re friends with each other and that was instantaneous. Sophie, then four, accepted baby Lily upon sight and vice versa. The cats who visit with our cats through the screen door are varied. George is welcome, but let Rocket step foot in our yard and Sophie and Lily go flat-eared. We call him the terrorist cat. He’s been known to attack other cats in their own yards and he has torn up more than one window screen trying to get at our cats inside the house.

What about dogs? Are they natural enemies of cats? Many of you reading this probably 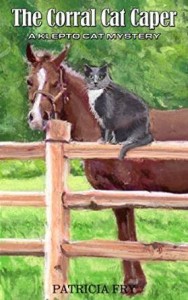 have both cats and dogs who have learned to get along. Some canine and feline pairs even adore one another. We’ve all seen pictures and videos on the Internet showing kittens piled in a large dog’s bed with him, a dog and cat playing or sharing a meal. There’s nothing quite as sweet as watching a relationship develop between what might be considered natural animal enemies. And that’s why we enjoy stories of unlikely friendships among the animal kingdom.

A quick peek into the great Internet over the weekend revealed cats enjoying friendships with a variety of other critters, including a rat, fox, owl, rabbit, monkey, lion cub and, of all things, a crow.

In my Klepto Cat Mysteries, the star of the stories, Rags, has a variety of friends—many other cats, a few dogs, and even a horse. So far, I haven’t introduced him to a wild animal, but I just might—hey, maybe he could have an adventure in a wild animal park or a zoo. Just think about the possibilities.

What are some of the most unusual/unlikely friendships you’ve observed in the animal kingdom?