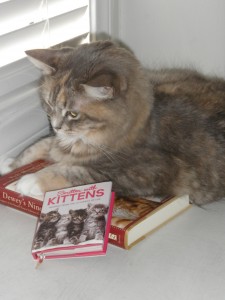 Today I’d like to share a few stories from my article files related to the library cat. Where do they come from? How do they get the job? Why do they stay instead of stray? How many library cats are on the job?

Currently, according to the expert on library cats, Gary Roma at Iron Frog Productions, there are 809 library cats in the world and 664 of them are at work in the US. Here are stories of how some library cats got their start.

In December of 1990, a scrawny, half-grown kitten started hanging around outside the Lee-Whedon Memorial Library in Medina, NY. One of the librarians decided to adopt the kitten and took her home, three miles away. However, the cat had other plans for her life. She somehow got out of the house and showed up back at the library three days later, waiting to be let in. She was in pretty bad shape when they found her and it took a lot of care and good nutrition to return her to health. Once she was healthy enough, they put Stax on staff as official greeter.

One January night in Spencer,IA someone put a twelve-week-old orange tabby in the 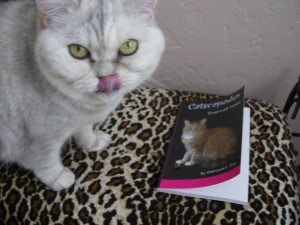 book drop of the local library. Not only did the kitten spend the night in the freezing cold, every once in a while someone, unknowingly, dropped books on him. When they found him in the morning, he was half dead and his paw pads were frozen. After a warm bath, he perked up and the staff decided to keep him at the library, where he spent the rest of his life. This may be the most well-known library cat of all as there have been numerous articles and even a book written about his life. His name was Dewey Readmore Books (Dewey for short).

Monty arrived at Montgomery Elementary School in Farmers Branch, TX one hot August day in 1992, a bedraggled eight week-old castaway. After failing to find his home, staff took him to see a veterinarian and, over time, Monty became a world-renowned feline who brightened the hallways of the school for many years.

I remember a library cat on hand to greet, warm, and delight patrons here in Ojai over the years. If you’re one of those who plans their travels to visit libraries with cats, here are a few stops to consider. Ernie is at the Bealton, VA library. You’ll find Stacks in Litchfield, IL and Elsie in St. Helena, CA. Miss Whispurr works in the Bradford, PA library, Trixie is in Independence KS and Miko runs the show at the Medical and Science Library at Texas A & M.