I planned a different topic for today, but decided, instead, to write about some of the strange things cats do and the odd situations they get themselves into.

We’ve talked about cats that steal things because my cozy mysteries focus on a klepto cat. But what are some of the other surprising, freaky, unique, charming, amazing, humorous and sometimes quite un-catlike things cats do? The cat fan and the cat fanatic know that there are probably as many answers to that question as there are cats in the universe. 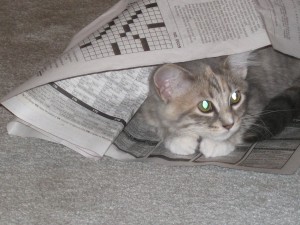 Today, I’d like to share a few off-the-wall things I’ve known cats to do. For example, when our dilute tabby (or as some describe her “torbie”) was a teenager, she rolled herself up in a section of newspaper like a burrito and she was stuck. She was rolled up tight with just her head showing. I wish I’d taken a picture of that before I rushed to release her. Truth? Yes, I did laugh at the spectacle before I began unrolling her.

A friend who sometimes fosters cats told me recently, that she observed a situation where a litter of kittens taught their feral mother about using a litter box. Mama cat didn’t have a clue what that box of sand was for until her kittens started using it on their own. She watched and eventually followed suit. As they say, we’re all students and we’re all teachers. 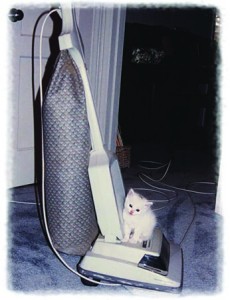 babysat a litter of kittens. He wasn’t happy about it, but he did it. He sat rigid in the box with the three kittens wriggling around his feet—never even glancing at them—until the mother cat returned. Then he was so outta there!

And who says cats are afraid of the vacuum cleaner and don’t like water? 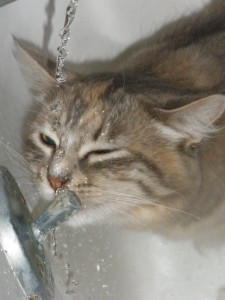 Would love to hear/read your favorite cat stories. Who knows, maybe some of them will show up in some form in one of my Klepto Cat Mysteries.