Have you seen cats with a split face—half orange and half black, for example, or half black and half white? There may even be cats with a face that is half mottled and half tabby. Hmmm, I wonder??? I’ve seen pictures of split-face cats. I thought this was just an interesting pattern. It turns out, however, that it’s apparently an interesting phenomenon.

These cats are known as Chimera Cats (pronounced ky-meer-ah). A Chimera cat, 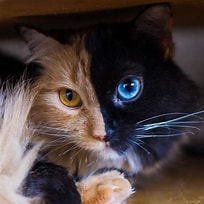 according to experts, is two cats in one. Different from conjoined cats, this cat actually started out to be two cats with separate DNAs, but they were united in the womb to create one cat. Sounds like science fiction or fantasy, doesn’t it? But I guess DNA doesn’t lie. Chimera cats actually have two different sets of DNA.

I don’t know if the split face is a feature in all Chimera cats. There may be Chimera cats without that feature. More research please. Here’s another interesting fact—most male calicos are inclined to be Chimera cats. I think I get it—a Chimera cat might be formed in the womb from a female cat and a male cat. Is that where the male calico comes from? Wow! This is getting kinda weird, but fascinating.

Are you interested in knowing more? Here’s one of many sites you can check out. https://cattitudedaily.com/what-is-a-chimera-cat/