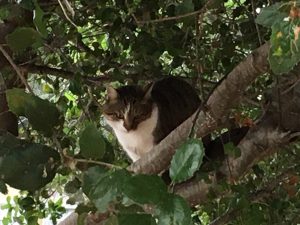 We talked about cats in boxes yesterday—another charming vision is cats in trees. I often photograph cats in trees as I walk the neighborhood and hike through a wilderness area. Just watch a cat in a tree. It’s as if the cat is in a world unknown to us—like when you used to play cowboys and Indians as a youngster or cops and robbers or humans and aliens. When you found the ideal hiding spot you felt safe and superior. In my early childhood backyard it was a huge tree I loved to climb. Later we moved close to a field of blackberry bushes where we’d carve out 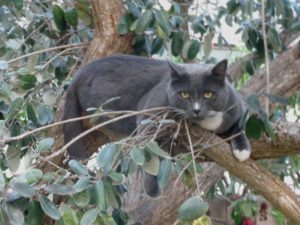 One of our kittens once climbed our gigantic oak tree and she was unable to get down. It happens. Cats are designed to climb up, but not down. Their claws are not made to climb down. So a friend climbed up after the frightened cat. She wrapped her paws around his leg and he climbed down with her attached.

That cat still enjoyed tree-climbing as an extracurricular sport when she was allowed outside. But she only climbed a small plum tree in the backyard after that. We eventually  removed that messy tree, and I guess Dinah-kitty didn’t get the memo. One day after that, she got frisky and started tearing around the yard. She raced across the lawn, like she used to do, heading for that little plum tree, but stopped dead in her tracks when she saw that the tree was gone. She was one confused cat. That’s one of many times I wish I had thought to turn a video recorder on. With cats you rarely get photo do-overs.

This entry was posted in About Cats, Uncategorized. Bookmark the permalink.