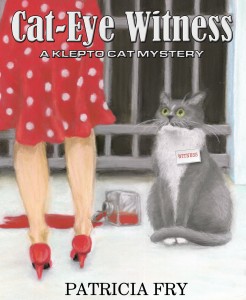 I’m excited to announce the launching of my 2nd in the Klepto Cat Mystery series, Cat-Eye Witness.

It debuted this week and is ready for you to download to your Kindle as we speak. It’s only $2.99. Isn’t the cover nice? This is another one of Bernadette Kazmarski’s creations.

Storyline: Savannah and Aunt Margaret open the old Forster home to the Hammond Cat Alliance for a fundraiser to help rehabilitate the abused horses rescued months earlier from the catnappers. Before the afternoon is over, the funds collected go missing and someone is murdered in an upstairs bedroom.

Suspicion surrounds Iris, a local waitress and Savannah’s new best friend. The only witness to the murder is Rags, Savannah’s cat. With the assistance of a cat psychic and Rags’s good friend, Charlotte (the young girl with Down syndome), the cat helps to “paw” the killer…but not before an attempt is made on Rags’s life. The case is solved only after Rags comes face-to-face with the killer under the most unusual circumstances.

Detective Craig Sledge is new to this book as is Damon, Iris’s errant son. Sledge finds this to be one of the muddiest cases he has ever worked, with inconsistent clues and no apparent motive. He’s constantly surprised, perplexed and impressed by the cat’s uncanny ability to come up with clues he has missed. His fascination with the attractive Iris Clampton also mystifies the detective and gives the story some unexpected sparks.

In this story, one of the rescued horses goes into labor and a there’s a night of high drama at the ole corral as veterinarians, Savannah and Michael work to save the foal. This causes Savannah to renew her deep interest in horses and riding, which ultimately serves to help her bond with a very important surprise character who finds his way into hers and Michael’s life just as they prepare to repeat their wedding vows.

While Rags is the animal star, he isn’t the only one featured in this story. Layla is back in all of her tangerine beauty. And Rags makes friends with Buffy, a perky almost Himalayan and the inseparable duo, Walter, an all black cat and his sidekick, Lexie, a charming afghan mix. Savannah’s new ride, Peaches, also debuts in this story. An incident with this mare adds another dimension to Savannah’s and Michael’s relationship. Can he hold her with open arms?

Some say this is a love story with a mystery in the background. And it’s a story of family and friendship as newlyweds Margaret and Max continue to be a meaningful part of Savannah’s and Michael’s world.

Order your copy of Cat-Eye Witness for your Kindle here: http://amzn.to/1bJiq0x

This entry was posted in Announcement, Cat Books, Cat Stories. Bookmark the permalink.