The Intricate Process of Writing a Cat Mystery 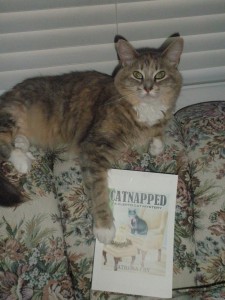 Cats are some of the most interesting creatures on earth. And there are new cat stories being played out every minute of every day in homes, shelters and on the streets throughout the world. There are hundreds of books of cat stories—some true accounts and some rather far-fetched. There are also a growing number of novels—especially mysteries—involving cats. Authors, including me, are having a blast creating stories around the mysterious cat and there are a lot of readers for such books, as well.

Cats are mysterious. They seem to know things beyond our comprehension. And cats have definitely been the inspiration for countless stories and pieces of art. OMG, I have a lot of cat books—both fiction and nonfiction. I have kitty cat earrings, key rings, calendars, mouse pad, refrigerator magnets, figurines, artwork, screensaver, clothing and more. I love to photograph cats and have won some awards with my photos. I used to write articles about cats for various cat magazines. I’ve covered such subjects as cat personalities, caring for a new kitten, the Pallas cat, holistic meds and cats, raising a feral kitten, shop and library cats and more. I came out with my collection of true cat stories a few years ago.

When I decided I wanted to write fiction—something I’ve been considering for years—of course, I wanted to write about cats. But in what vein? I would need a starring cat. There would be no talking cats or cats that were personified to an unbelievable degree. He (or she) needed to have an unusual, yet catlike style or characteristic. I decided to pattern the starring cat after my mother’s cat, Smokey, but with my cat, Lily’s habit of carrying things around in her mouth. After thinking about this combination, I began considering the concept of kleptomania. Why not expand on Lily’s habit and make the cat a kleptomaniac? I figured this trait would come in handy for solving murder mysteries.

As far as naming the cat, I can’t even tell you how it happened. I just began writing the first story, Catnapped, and the characters started naming themselves. I only changed one or two minor characters’ names after the writing was done. The featured cat is Ragsdale—Rags for short. Sometimes his owner, Savannah, calls him “Ragsie.” I tried numerous times to change that name, but it stuck big time. I’ve never known a cat named Rags, don’t even much care for the name. But this is the cat’s name, nonetheless.

Naming characters can be an interesting process. While some authors develop their characters and name them before they start writing the book, others (like me) let the characters introduce themselves as the story progresses and they usually come with names.

The Catnapped story is based on an incident that actually occurred in a community in one of California’s interior valleys. Only there wasn’t an intuitive, kleptomaniac cat to help solve the crimes. Is stealing a cat a crime? That’s an interesting question. It used to be that you could not legally own a cat—they were considered free spirits. Even when you had the registration papers, cats could not be owned. There was a well-known case in CA during the 1970s where someone stole a cat from a family and the police could not legally make the thief return it. I wonder if the process of chipping cats has changed that. Does anyone know?

If you’d like to know how my mind works when it comes to writing fiction and how Rags’s klepto habit led to solving the mystery, read Catnapped. It’s on Kindle at Amazon.com.
http://amzn.to/14OCk0W It’s only $2.99.

Watch for the announcement of the second in the Klepto Cat Mystery series, Cat-Eye Witness coming next week!!!

This entry was posted in Cat Books, Cat Stories, Cats and Writers. Bookmark the permalink.