Can’t Get Kitty to Eat?

Feeding cats can be a challenge. There are the extremes: kitty eats everything in sight and begs for more or she turns her nose up at every morsel you offer. Thankfully, most cats fit somewhere in the middle most of the time.

My mother has a big boy of a cat with a solid, muscular build who only eats a bite or two from his fancy china plate morning, noon and night. He has a buddy who hangs around, seemingly for the sole purpose of cleaning up Smokey’s leftovers. Gibbs began showing up at my mother’s house a year or so ago. He obviously belongs to someone. The tag on his collar says “Gibbs” and gives a phone number. But he is thin and trim despite the gourmet meals Smokey leaves for him on a daily basis.

So why is Gibbs so thin and why is Smokey so buff? Smokey is one of those cats you cannot keep in, to my mother’s chagrin. At 91, she was hoping this part ragdoll kitten would cozy up in her lap. And he does, only after he has spent the day adventuring in the eucalyptus grove behind her tract of homes. Since he roams the neighborhood, one has to wonder, is Smokey eating at Gibbs’s house or maybe he is scrounging food from several neighbors. We know he does some hunting—he has brought my mother an array of critters.

I’ve had two cats over time who refused meals at least on occasion. Both were in renal failure. Currently, it is our little Lily. She’s only four, but has been diagnosed with kidney disease. She loves her special diet and most of the holistic supplements we give her each day—only some days she just doesn’t seem interested in food. Yes, we’re feeding her pumpkin and probiotics to help her digestion. 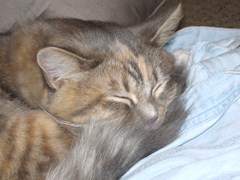 It breaks a mommy’s heart to see a kitty who was obsessed by food to suddenly turn away from it. However, I’ve found that if I hand-feed her, she will eat. So a few times a week, when Lily doesn’t seem to have a stomach for her food or the energy to eat it, I get down on my hands and knees and feed her small amounts from my fingers. Then she curls up in my lap and sleeps contentedly, while I sit here and write my blog. A little later, she’ll be up chasing around the house with Sophie kitty, helping me make the bed, begging for bites of my cantaloupe or cooked carrots and watching the hummingbirds through the office window.

Speaking of feeding cats, all of our cats are formerly feral or their mothers were. Sophie was found in a cat colony at 10-weeks. I guess it is because of her early imprinting, but we are not allowed to watch her eat. All of our cats are inside cats. When we feed Sophie, we have to put her plate down and then slip away to another part of the house or at least sit quietly until she is finished eating.

Max eats only kibbles. We can’t get him to eat the canned kidney support food the vets have prescribed for both him and Lily. He’s 14 and a half and in the early stages of kidney failure. Unlike Lily, he has no symptoms, yet. Max, like Sophie, does not want an audience while eating.

What are your cat-feeding challenges? What crazy things are you doing to appease your cat?

Lily has been featured in two books. Her story, along with the story of several other cats, appears in Catscapades, True Cat Tales ( http://www.matilijapress.com) And Layla in Catnapped, the first in my Klepto Cat Mystery series, is loosely patterned after Lily. Rags, the kleptomaniac cat who always has a paw in solving the crime, is Smokey. Read Catnapped on your Kindle and watch for the 2nd in the series, Cat-Eye Witness. In this story, Rags meets with a cat psychic and he is a witness in a line-up. http://amzn.to/14OCk0W

This entry was posted in Cat Care. Bookmark the permalink.