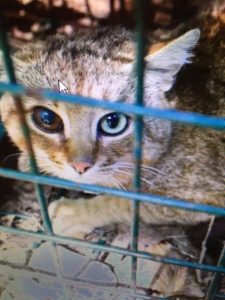 There’s an interesting new cat living on an island in France. They’re calling it a cat-fox and they say there are only 16 of them. What’s unique about this animal? It looks like a cat, but is longer, has larger ears and more developed canine teeth. This species also has quite a long tail with rings around it and a black tip.

In testing the DNA of this unusual cat, they’ve determined that it is not of the same species as our domesticated cat, but closer to the African forest cat. They’re still studying these cats, which some say resemble the cats in a myth created by early shepherds. So one has to wonder is this actually a new species or is it newly discovered?

I was intrigued by the odd-eyes of this one. I couldn’t find information indicating if this is common to the cat-fox or not. From what I read, it doesn’t appear that this cat has been domesticated.