Mindful Monday – Those Dear Cats Who Live Only in Our Heart 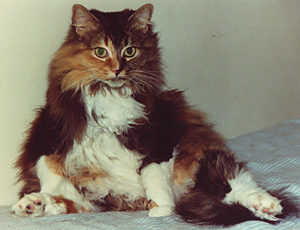 DEADLINE FOR THE CAPTION CONTEST:  We’ve received some interesting possible captions for the photo I showed you on Friday. Let’s set the deadline for your captions for Wednesday–July 4. Read the particulars at last Friday’s blog post.

If you’ve loved and cared for cats for any length of time, you’ve experienced the pain of kitty-cat loss. Today, I’d like to honor some of the cats I’ve loved, from my first childhood cat, Beloved Belinda, to our handsome “woodpile” cat, Max, who lived rather awkwardly with us for seventeen years. By that, I mean he loved being our cat, but he never truly became domesticated in every sense of the word. All of the cats I’ve known have taught me something and/or helped me to evolve along my earthly path while gifting me with extraordinary pleasure during our time together. I’m sure you feel that way about the cats in your past and present.

Eight years ago when I wrote Catscapades, True Cat Tales, I had a friend create this 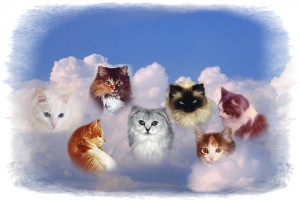 photo depicting several of the cats who had, by then, pussy-footed across the rainbow bridge. Winfield, the white odd-eye cat on the left, was one of the friendliest, most gentlemanly male cats I’d ever encountered. He was sort of forced upon us and are we ever glad we took him. He had a safe and loving home for as long as he lived and he brought us enormous joy and comfort.

The orange and white kitty next to Winfield is Rosie. She came into my life rather quietly and she exited in the same way. At a young age she suffered a fatal aneurism. There was a rainstorm the night I rushed her to an emergency veterinarian hospital in the next town. Sadly, I drove home without her, and she, too, is remembered fondly.

The calico in the top row of clouds is Daisy. She was one of several colorful kittens born to a Himalayan-type cat I’d rescued and the two of them remained with me through some rough patches in my life. I think Daisy and I learned a lot about life from each other.

Crystal (center) was the purebred shaded-silver Persian I’d dreamed of having for most of my adult life. And what a sweet being she was. She looks healthy here, but she came to me with feline leukemia before much was known about the disease or how to diagnose it. Our love affair was cut way too short, but her memory does not fade. 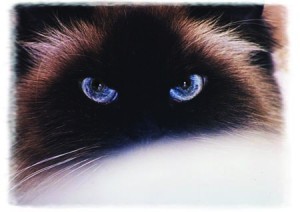 I also purchased Katy, the Himalayan shown next to Crystal. When she developed a serious infection in the uterus and it had to be removed, I considered her a rescue. Anyone having purchased her for breeding may have simply discarded her and what a waste that would have been. Katy (Katrina of Ojai) was a wonderfully loving being—one of the sweetest kitty spirits I’ve known. We shared a beautiful life together for 18 years.

Mandy was one of several calico-type cats I collected. She represents another phase in my world as a cat-mom. I literally did collect calicos during that period. That’s when I learned the gamut of personalities among calicos.

Gus is the grey and white boy. I found his mother, PomPom, at the local pound when my children were the ages of my great grandchildren—so many years ago. She was about as unique as cats come. If there’s bipolar in cats, PomPom was probably afflicted with it. We allowed her to have three litters of kittens—that was before I’d become educated about the wisdom of the spay-neuter movement. PomPom and all of her offspring, including the two kittens I kept, Gus and Molly, will always be remembered.

While I envisioned this post to be uplifting—I wanted to celebrate some of my favorite feline friends—my idea seemed to backfire a bit. I’m feeling a little sad right now. I’m grateful that these beautiful beings existed. I feel warm when thinking about them, but sad that they are only a memory. If you’ll excuse me, I want to go cuddle with Lily and Sophie now.

This entry was posted in Living With Cats, Uncategorized. Bookmark the permalink.