Newsday Tuesday – Cats Who Book Their Own Trips 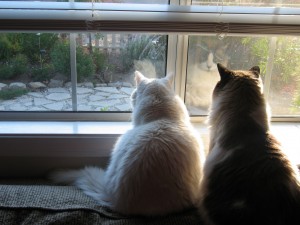 Here we are back to the topic of traveling cats. You probably read about Kitty Bitty, the five-year-old tabby who went missing from her Georgia home July fourth (probably frightened by nearby fireworks) and was found in Riverside, California. She evidently rode all that way in a Pepsi truck. Good thing she still wore her tags so she could be identified and reunited with her owners.

But one has to wonder where she was during those five months before she climbed aboard the long-haul truck. She must have been fed. Why didn’t someone check to see who she belonged to and try to return her to her home? Was she being elusive? Wouldn’t she let anyone near her? Or didn’t anyone care? I mean when a cat wears a collar and tags, that usually means someone does care. Maybe Kitty Bitty was living on her own, scavenging to survive. We all want to know, but seldom do we get the answers. That’s why I thought it was fun to follow Rags a time or two when he escaped. In one story he wore a GPS monitor so he could be tracked while he was on a sort of secret mission. A couple of times eye witness accounts and random surveillance cameras were checked to find out where Rags had been. In the story I’m writing now, they will use a go-pro camera to discover where he’s been going.

There’s also the story of Percy, the cat who typically kept his owner company on long-hauls 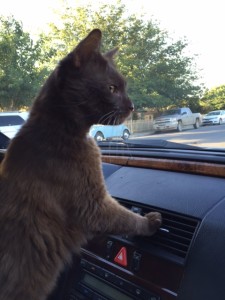 in the cab of his 18-wheeler. Sometimes cats are too smart for their own good. Percy evidently, while his truck-driver-owner slept, lowered the electric window and escaped. When his owner couldn’t find him, he sadly continued on his trip and 400 miles later, when he stopped, out popped Percy from underneath the truck. Yes, he rode the 400 miles on the undercarriage of the semi.

Last year on Christmas eve, Nadia left Sheboygan, WI and showed up two months later in Naples, Florida. No one knows just how she got there.

One family took their cats while vacationing in Wisconsin and one of them, Skittles, escaped. When it was time to return home to Minnesota, they still couldn’t find Skittles, and had to leave without him. Boy were they surprised when, 140 days later, he showed up at their home, paw pads raw and a little underweight.

But when Sandi decided to take a trip, she went first class. She somehow wormed her way onto a luxury ferry in the UK and ended up in Spain. A chip identified her and she was reunited with her family. They think she might have curled up on the hood of a car that was being loaded onto the ferry. When she was discovered, she was treated like the rest of their guests—like royalty.

This entry was posted in About Cats, Cat travel. Bookmark the permalink.