Mindful Monday – Is There a Cat in Your Library?

Cats and books go together. Who doesn’t love the image of curling up on a cool winter day with a cat to read a book? As we’ve discussed here in this blog, many writers have cats wandering in and out of their writing room. So it follows that cats would be attracted to a public library and that librarians would welcome them.

I wrote an article once about library cats, which included Dewey, the most famous library cat of them all. Remember the story about how librarians found Dewey Readmore Books, a tiny ginger kitten, in the book drop one frosty morning? They nursed him back to health and he spent the rest of his 19 years as a library cat in Spencer, IA.

The library cat concept is not new. According to historians, cats were used for rodent 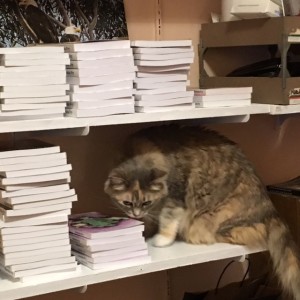 control in temples in ancient Egypt to protect the papyrus scrolls. In the Middle East, monks brought in cats for the same reason—to keep rodents from nibbling on their manuscripts. And it is told that at one point in history, the British government paid librarians to keep cats. And the tradition continues. There are currently hundreds of cats living in libraries throughout the world and most of them are there purely for the enjoyment of patrons. Some say it’s because of the calming effect of the cats. Cats can make a library visit more charming and comforting. (Maybe they should have cats in dentists’ offices and children’s hospitals.)

While some cats are brought in to be library cats, others find their way in. I remember one story where they figured the cat must have become lost while camping with his family and he found refuge at a local library. Each library cat has a story, as you’ll see when visiting these sites. Here’s one that discusses the history of cats in libraries and shows stunning photos of some of this world’s library cats. http://www.care2.com/causes/cats-and-libraries-a-longstanding-history.html This site features ten library cats: http://mentalfloss.com/article/52810/10-cats-who-live-library