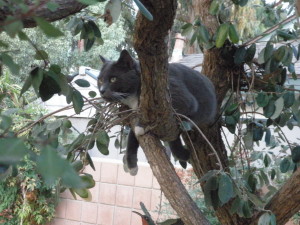 Chicago is known as the rattiest city in the country. Some businesses and neighborhoods are simply overrun with gnawing, disease-spreading rats. Evidently, this problem is beyond the capability of professional pest control and many business owners and home owners have called in the big guns—cats. They’ve recruited some of the 3,600 cats in 650 colonies around the city for help.

The Tree-House Humane Society, who manages the colonies, will deliver cats to the property along with a cushy crate “apartment” for the cats (so they’ll want to stick around) and they say that they’ve had nearly 100% effectiveness in ridding these areas of rats. Some of the rats are eaten and some leave when they sense there are cats about.

Makes sense. Cats were the world’s first pest control, having been relied upon for their hunting prowess some 10,000 years ago. It’s an interesting story. Read it here: http://www.cnn.com/2016/07/15/health/cats-chicago-rat-patrol/index.html

Is your pussy-cat a hunter? Or does she simply watch you dart around the room trying to chase down a lizard or a mouse that sneaks into the house? Most cats certainly have hunting instincts. Some are more keen than others. But did you know that the ordinary house-cat and yard-cat are considered better hunters than wild cats such as tigers? Here’s an interesting site on that topic: http://www.dailymail.co.uk/sciencetech/article-2785323/Cats-better-hunters-TIGERS-Domestic-felines-agile-powerful-cousins-experts-claim.html