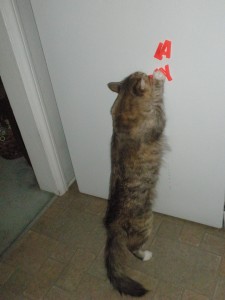 How do you name your cats? Do you keep the name an older cat comes with or do you change it? Do you have a favorite name you’ve saved for the next pet you rescue? Maybe it takes you days to finally discover a name that will fit your new kitten or cat.

My mother had quite a difficult time naming her cat. This part ragdoll kitten (who looks nothing like a ragdoll) was hand delivered to her from my brother’s family in Idaho and she finally decided to name the grey-and-white kitten Shady. She couldn’t remember the name, however—kept calling him Smokey (which was the name of the cat she’d just lost). So Shady’s name became Smokey by default, you might say.

When my daughter brought Lily to us, we struggled for about 24-hours to come up with a 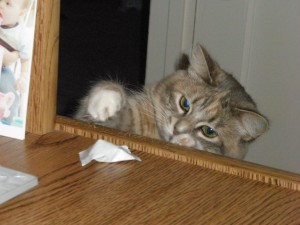 name that would suit her. After watching the way this tiny kitten moved, played, interacted with us, approached the other cats, and so forth, I noticed how delicate she was, sweet, soft—she had the softest fur… I thought she should have a fragile name, and Lily was one of the sweetest daintiest, softest names I could come up with.

Sophie is a tortie and it didn’t take long for us to give her a name that we thought defined her rather old-fashioned coloring and style.

Years ago, when we decided to keep a robust little boy kitten—one of 3 we found in our woodpile one summer day—we knew his name should match his demeanor. He was playful, sturdy, confident, funny…I struggled over his name for several days. When I attended a high school graduation, I listened carefully to the names of the graduating students as they were called out and knew as soon as I heard it that this kitten would be known as Max. 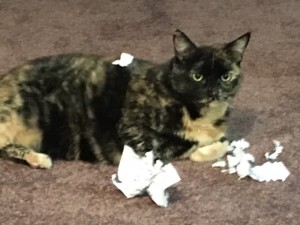 When a head-strong, long-haired calico came into our life via the Humane Society one summer, she came with the name, Katy. We already had a cat named Katy, so we set out to change this young cat’s name. We threw out a lot of names in her direction and none of them would stick. Finally, we noticed that this cat always joined us when we went into the kitchen, that’s when we realized her name was Dinah. Remember the song…“Someone’s in the kitchen with Dinah…?”

But probably the most unusual naming process I’ve been involved in was when my girls were small and we adopted a kitten from the animal shelter. My three daughters and I could not agree on a name. Finally, I suggested we let the kitten name herself. So we wrote our favorite names on pieces of paper and tossed them on the floor, hoping the kitten would grab one of them and that would be her name.

The kitten, however, didn’t pay any attention to the wads of paper when we tossed them. So we dipped each of them in gravy and tossed them again. This time, she rushed toward the wads, picked one up and ate it. Oops! Now she had a name, but we didn’t know what it was. So the third time we tossed the paper balls, we were quick to grab the one that attracted her and discovered that her name would be PomPom. Yup—the youngest daughter’s choice.

What are your most unusual cat-naming stories? Do you have trouble naming your pets? Did you know there are several sites listing names for babies as well as pets? I use them, actually, to come up with names for some of my characters in the Klepto Cat Mysteries.