Wild (and Sometimes Crazy) Wednesday – My Cat Just Stuck Out His Tongue At Me! 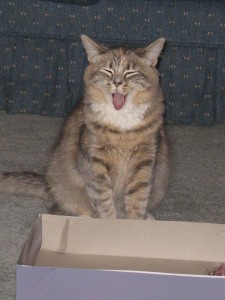 Does it sometimes seem like your cat is dissing you? When you want to pet her, she bites. Or you wriggle your fingers in an attempt to play with her or toss her ball and she just looks at you like you’re weird. I was talking to Lily-kitty the other day—having a meaningful conversation with her—and she yawned in my face.

What about when your cat stares at you—just stares from across the room. Does it make you squirm? Do you feel as though you’re being hated or maybe adored? With some cats it’s hard to tell what’s on their mind.

Last night, Dennis looked at Lily, who was looking at him, and he asked, “Are you mad at me?”

When I questioned his question, he said, “She’s looking at me like she’s mad.” There was no body language, just a stare.

Can you decipher your cat’s moods just through their eyes? Does your cat have expressive 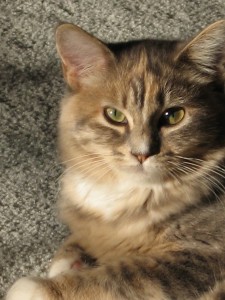 Lily is waiting patiently for the next book

eyes that reveal her mood?

Sure, when she pins their ears back, swishes her tail, and growls, you know she’s angry. When she sits up tall, ears forward, eyes wide, she may be interested in something in front of her or she’s eager and ready to play. When she purrs, she’s most likely contented. But what about that stare?

I swear when we’re preparing to leave, we get a sad look from Lily. When she’s waiting around a corner to pounce on an unsuspecting Sophie, her eyes are alive with impishness. But sometimes she just stares from across the room—locks eyes with me and I don’t have the slightest idea what message she’s trying to convey.