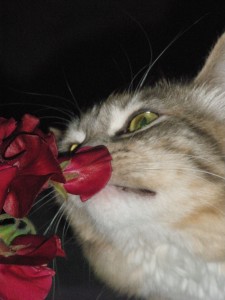 You’re probably wondering how things could get any wilder and crazier than yesterday’s post about cats (and other animals) who’ve served in public office.

What about cats who eat or chew on things not typically of interest to members of the feline species? In our household, Sophie kitty will eat ribbon, string, and she has also been known to dine on those metallic bows on packages under the Christmas tree. A few Decembers ago I wrote about a near-serious incident occurring when Sophie began secretly chewing those bows. (There are no more bows or ribbon in this house.)

Lily is attracted to cellophane tape and plastic. She gets excited when the big brown truck brings us a package and she immediately checks it over for yummy strips of tape.

George, the Maine coon cat next door has such a bad habit of eating plastic toys and 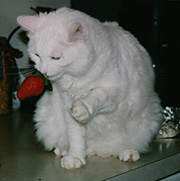 Winfield playing with a strawberry

electrical cords that the family has ousted her from the house. Not only has her attraction caused her serious injury and numerous veterinarian visits, it has cost the family money and hassle because they’ve had to replace their computer cords so many times.

Why do cats eat inedible objects? Some experts say this could be a sign of a medical condition—anemia, for example, or periodontal disease. Some cats pursue these activities because of stress. Boredom is another possible cause—especially for the cat who isn’t getting enough exercise. This might also include the aging cat. 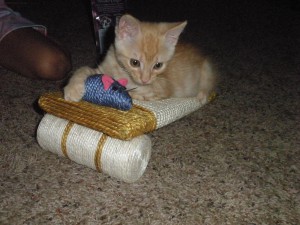 What is the solution? For some it is an increase in activity—toys and climbing apparatus that encourage activity and/or more playtime with people. Some behaviorists suggest giving these cats more greens or, perhaps a chew toy soaked in a flavor the cat can’t resist. There’s also a device available called a SSScat Automated Cat Deterrent. Evidently, it has a motion sensor and when the cat gets near the forbidden object, it automatically sprays a nontoxic, harmless gas that startles the cat and discourages his return to that area.

We’ve talked about Feliway sprays and diffusers designed to calm a stressed cat. Some cat owners have found Vicks (the vapor rub) to be effective in keeping cats away from certain areas.

For more information about cats who eat foreign matter and other unusual behavior, I suggest you follow this link. You’ll be surprised at what you learn about your cat.

This entry was posted in Cat Safety. Bookmark the permalink.