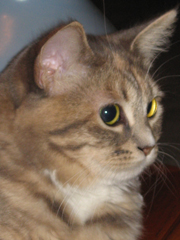 Some of you have been wondering how Lily is doing. In June, I wrote about her horrific accident with an ordinary, seemingly safe, carpeted cat tree. We believe what happened is that Lily and 4 year old Sophie were playing, as usual. And Sophie spun off of the cat tree and tipped it. Lily, 12 weeks old, must have been clinging to the opposite side of the cat tree or climbing it. We were home, but in another room, so didn’t see exactly what happened. But we found blood under the cat tree, so we know it fell on Lily.

It must have been moments after it happened, that we began to hear faint kitten cries. We went in search of Lily and found her tangled in a decorative plant stand a few feet away from the downed cat tree, barely conscious, her face covered in blood and her mouth hanging open.

I don’t even want to live through the horror again by writing it. You can read more about the accident and her veterinary and home care in my blog entry for June 30, 2009.

One thing I didn’t report in that blog post was how after 3 or 4 days, we thought Lily was somewhat improved until about noon, when she started to fade. It was as if she was giving up. We rushed her to the vet again and he said, “Well, she looks a lot better than she did when you first brought her in, but I will give her something for swelling.” I’m now told that there could have been swelling in her brain. It is possible that without that shot, she may not have made it. We still don’t have a diagnosis as to where the blood was coming from—exactly where the injury was. But we’re pretty sure that she had a concussion. The vet originally thought her jaw was broken; thankfully extensive exrays showed that was not the case.

By the way, the cat tree now lies on its side—we no longer stand it upright. Lily still plays on it every day. She never seemed to fear it or Sophie even after the accident.

Sophie was traumatized after the accident. We had to leave Lily at the vet for several hours and Sophie walked around and around the house meowing and searching. Once we brought Lily home and secured her in the large enclosure, Sophie stayed close. She knew that something was wrong with her little buddy and it seemed to upset her terribly.

Today, Lily is 8 months old and she is a delight. Looking back, I can see that it took her a while to completely recover from her accident. To me, the kitty mommy who kept vigil over her day and night for literally weeks, she seemed to have some issues for a while with balance, depth perception, confidence and maybe even headaches. But she was much improved.

And then she had another setback with one of her vaccinations. She had a scary reaction to something in the vaccination—we’re thinking it was the leukemia vaccine. Late that afternoon, after the veterinarian’s office closed, Lily seemed lethargic. We could tell that she just wasn’t feeling well. And she was in pain. I found that out when I attempted to pick her up. I did some research on the Internet and learned what to look for indicating that this was a very serious reaction. I watched her closely. She eventually chose a spot in the hallway to crouch and that is where I slept all night—waking up many times to check on her—the vet’s phone number close at hand. It was a long night, but she made it through. She will not have that vaccine again without the antidote—which I think is like Benedril.

As I said, Lily is an absolute delight. She is a total people cat—loves us, loves it when we have guests and adores little children. We have two formerly feral cats and yearned to have one that wasn’t such a challenge. I found out later that Lily was far from a domesticated cat. I ran into the woman my daughter got Lily from (she had 15 kittens from 3 mother cats in late March and early April that year). She asked me how Lily was doing. I told her how much we enjoy her and she said, “You mean, she lets you pet her?” I responded, “Yes, she’s a real snuggle bug.” This woman said, “Well that’s surprising because her mother is absolutely wild and the kittens were never handled.”

No one told Lily she is supposed to be wild. She is one of the most social kitties I’ve ever had. And we wonder if she may have passed some of our other kitties on her way to us—those who have crossed over the Rainbow Bridge. You see, she brought with her Winfield’s obsession with water. She even occasionally drinks by using her paw like he did. And just this morning I caught her moving one of her water dishes around. Winfield was never satisfied with where I put his water bowls. Winfield was our “greeter” cat. While the two formerly feral cats ran away when they heard the doorbell, Winfield ran toward the door to see who was there.

Lily puts me to bed at night like Katy (my beloved Himalayan) used to do. And she has Katy’s sweet, completely trusting, gentle demeanor. There’s no rough and tumble play for this demure kitten. Oh she plays, but like a girl.

We had her spayed in late September. Gosh, we hated to leave her overnight. And when we brought her home the next day, Lily was so happy to see us that she kept trotting from one of us to the other expressing pure joy in her kitten-like gestures. She repeatedly hugged our hands to her chest and purred, and she buried her face in us and snuggled. It was like watching a happy puppy, she expressed such glee.

As you can tell, we couldn’t be more pleased that we finally opened our home to another rescue kitty. There’s nothing like a kitten to warm one’s heart and bring a smile to your face.

Be sure to order your copy of Catscapades, Tales of Ordinary and Extraordinary Cats for Christmas giving. You can order the E-book or the comb-bound print copy–fully illustrated with charming cat photos. http://www.matilijapress.com/catscapades.html 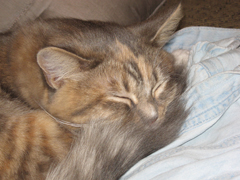