All for Animals Founder Helps Shelter 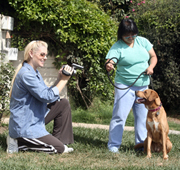 Karen Stevens of Santa Barbara, California does a lot for animals. First of all, she has been involved for many years in cat rescue. She founded an International organization called All For Animals http://www.allforanimals.com. She had a spot on local TV for quite a while where she featured a pet from local shelters each week. And she launched the Adoptable Pet Photo Gallery, in hopes of helping shelter animals get adopted.

Recently, Karen began video-taping cats, dogs and other shelter animals that need homes and posts these at her website. They also play the videos at the shelter so that visitors can experience the personality of a dog or cat that happens to be sleeping at the time of their visit, for example.

All for Animals is not a new pup, er, kid on the block. Since 1997, when Karen Lee Stevens founded the organization as a resource for animal lovers in Santa Barbara, the group has been dedicated to raising awareness about cruelty-free living and the importance of compassion to ALL animals.

But that’s not all. When Karen first viewed a video of an adoptable dog at a local animal shelter a few months ago, she said she had one of those “aha” moments. “I actually got goose bumps looking at this dog’s video and listening to the background music (Rio by James Taylor),” Stevens remembers. “The dog happened to be named Rio and the James Taylor song happens to be one of my favorites. Do you ever have a flash of insight where you just know when something is right? For me, I knew in that moment that I wanted to shoot videos of adoptable pets and post them on the Internet.”

Karen calls herself a “video virgin” as she’d never even held a video camera until last month. That’s when she signed up for an introductory camera class at Santa Barbara Channels, a non-profit organization that helps other non-profits produce and air their own high-quality shows on local public access television. Since then, Karen obtained enough funding to purchase a Sony Handicam camcorder and a Macintosh computer (di riguor for any type of graphics or video work) and got to work. Every two weeks, she spends a couple of hours at local animal shelters, shooting video of adoptable cats and dogs and then coming back to her home office, where she edits the videos and adds narration about each pet.

She has always posted photographs of adoptable pets on the All for Animal’s Web site and she felt that videos would be a natural extension of the Pet Photo Gallery. Karen says, “Video enables potential adopters to get a better feel for an animal’s personality, whether it’s watching a dog catch a Frisbee or listening to a cat purr. We want to make it fun and easy for people to meet and ultimately adopt a new best friend.”

All for Animals gratefully accepted donations to help them continue their important and life-saving work of helping shelter pets get adopted. You can send a tax-deductible donation to: All for Animals, PO Box 3534, Santa Barbara, CA 93130. The 501(c) non-profit organization is also registered with Cars for Causes, and accepts old cars, trucks, motorcycles and RVs (this is a perfect time of year to dispose of your old clunker and get a nice tax break). To learn more about All for Animals, visit the organization’s Web site at www.allforanimals.com.