I had a delightful talk last week with a reporter from the Wall Street Journal. She was doing a piece on cat fiction and seemed particularly interested in talking cats versus ordinary cats. As many of you know, the cats in my Klepto Cat Mysteries are ordinary cats who sometimes get involved in some extraordinary situations. Rags, for example, is a kleptomaniac cat. Taking things is unusual, but not out of the scope of what a cat can and might do. 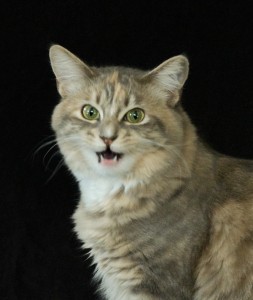 Some authors of cat fiction write scripts for their cat characters—and sometimes the dog, horse, and chicken characters, as well. Others have created cats who can communicate with their owners through telepathy.

When the reporter asked me why I did not choose to have my cats talk or send telepathic messages, I told her it didn’t occur to me. But that I probably wouldn’t have chosen to include talking cats in my stories because my background in writing is so strictly nonfiction. Fiction is relatively new to me, but talking cats would be a real stretch.

How about you? Do you prefer that the animals in the stories you read are more animal-like or human-like?