The Rescue of Pumpkin Kitty 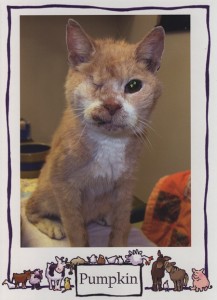 Last week I featured a picture of Catalina, an adora—dorable kitten who would melt anyone’s heart. Now, I’d like to introduce you to Pumpkin. He’s the same basic color as Catalina. He is a cat. But do you think that someone looking at this picture would give the same reaction as they would when viewing Catalina Kitten? If you said, “No,” you are correct.

Actually, the people I tested with the two photos were much, MUCH more adoring toward Pumpkin. It’s true. Most people looked at the photo of Catalina and said, “Oh, how cute,” and then went on talking about something else. When I showed those same people the photo of Pumpkin and told them his story, they generally, hugged the photo to their chests. Some produced a few tears. My 27-year-old granddaughter said, “I love him,” and asked if we could adopt him and bring him home. (And she’s allergic to cats.) Most were speechless as they took a moment to emotionally connect with this precious kitty. No one turned away in horror. Everyone embraced Pumpkin in their hearts. Most will never forget him.

Who is Pumpkin? Where did he come from?

Well, I received him as a Valentine’s Day gift from a dear friend. She donates to a rescue organization and facility called Pasado’s Safe Haven located near Sultan, Washington. She “adopted” Pumpkin in my name with the promise of supporting his needs for as long as he needed the help.

Here’s Pumpkin’s story. A woman found this cat crawling in a gutter one cold and raining day. He was terribly thin, filthy, dehydrated and flea-ridden. He was missing an eye and his jaw had been broken and miraculously healed—albeit a little crooked. He looked like he had been tortured and even used as target practice, as there was evidence that he’d been shot with a pellet gun. This woman knew about Pasado’s Safe Haven and called them immediately. The volunteer rescue patrol couldn’t believe that the cat was still alive and the veterinarian and the emergency clinic didn’t offer much hope for this cat.

Now get out your box of tissues. This kitty did survive and they say that he is one of the “sweetest, calmest, most intelligent cats you could ever hope to meet.” How wonderful that he has found love. Even though he has tested positive for feline leukemia and hyperthyroidism, he is not considered by the folks at Pasado as a lost cause. Not even!!! He is so affectionate—they say, he loves chin scratches and ear kisses—that he lives in the People Barn with the staff at Pasado’s. And he also enjoys sharing their vegetarian lunches with them.

According to the information I received along with Pumpkin’s picture and story, I learned that Pasado’s Safe Haven is named for an older donkey who was tortured and killed by three teenage boys in 1992. At the time, the fine for such a crime was $50. After the donkey’s death, the founders of Pasado’s Safe Haven lobbied for passage of the Pasado Bill, which makes animal cruelty a felony in the state of Washington. They continue to be active in changing laws relating to animals and they also provide shelter, care and love for all kinds of animals. It sounds like a wonderful place for the 250 animals who reside on the 85 acres. And no animal lives in a kennel or cage. Don’t you love what these folks are doing? Sadly, their amazing and loving efforts are helping only a fraction of the animals throughout the U.S. who need help. Be sure to visit their site and learn more about Pumpkin and all of his animal and human friends. www.pasadosafehaven.org.

I didn’t include Pumpkin’s story in my new book, Catscapades, Tales of Ordinary and Extraordinary Cats. But I do feature a section on Throw-Away Cats. Here, you’ll find these stories: “Stories of Strays and Other Free-Roaming Cats,” “Memoirs of a Colony Cat,” “Ferals in the Woodshed,” “From Feral to Fabulous: Greta’s Story,” “The Secret Life of a Neighborhood Feral” and “Sophie’s From Rags to Riches Story.”

This weekend I had three customers return to purchase copies of Catscapades, Tales of Ordinary and Extraordinary Cats as gifts for others. They purchased a total of 9 books. Remember, the book is now illustrated with around 80 photos of cats (and a few dogs). Order your copy today: www.matilijapress.com/catscapades.html