Wild (and Sometimes Crazy) Wednesday – Having Fun With Fiction 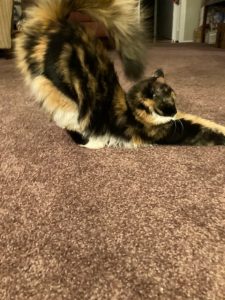 This week we’re exploring the world of fiction-writing. Here are some scenarios you might get a kick out of. As you may or may not know there’s a lot of research that goes into most fiction books. I’ve had to research such things as when were bomb shelters the rage, at what point did phone booths disappear—are there still any around, various cat maladies and treatments, cat behavior, plants found in certain geographic areas, physical capabilities of cats, cat car seats, modern day cat carry packs, and so much more.

I have also found myself carefully watching the movement of my cats so I can accurately describe certain activities and actions. But probably the most unusual bit of research I’ve done is alone in my office on the floor trying to replicate a fight—where should that guy’s arm be if the other guy is in this position… Even I was laughing as I performed this interesting experiment. And by golly it helped. I needed a little Advil after this, but I believe I nailed the visual of this battle.

This entry was posted in Cat resources, Cats and Writers. Bookmark the permalink.