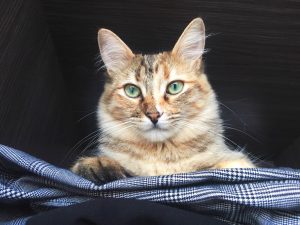 Last week I shared with you a little history from Paul Koudounaris’s (and his cat, Baba’s) book, A Cat’s Tale, a Journey Through Feline History. Today I want to share a poem I wrote for a class assignment many years ago. Here I attempted to encapsulate the history of the cat in poetry form. Yes, even poetry can require a lot of research.

She was deeply etched in Egypt’s ancient marble as oils of today are fluid in her image.

She padded about the pyramids. She saunters gingerly now through the city’s clutter.

Mau, man’s idol, was molded into powerful figures of clay much like the cat cast of this era

Guardian of Europe’s granaries, keeper of dragon-emblazoned silk, she sought, she seized, she slew. For mankind, for her own kind.

Today’s cat wraps herself sinuously around the hearts of many reflecting her ancestral likeness being lured into lotus-scented, bamboo-lined homes and coddled on laps of kimono clad figures.

Soon the destiny of silk for future kimonos is doomed. The feline is forced into freedom.

She is free today, free to multiply, to starve, and to die.

Sacrificial fires glowed in her honor–holocausts leaving only her cindery skeleton,

She was liberated from the ashes by man, who lay helplessly embraced by the shuddery blight. Free again, to roam infested alleys in pursuit of her natural prey. The horror of the plague graced the cat with new hope

Cat; a fireside sphinx,; A clown, making life her circus

Possessor of a mystery that has resounded through the ages Predictable, in that she isn’t.

Eternally clad in her aura of dignity.

Now go hug your cat. She’s been through a lot.

This entry was posted in About Cats, Cat art, Cat Poetry. Bookmark the permalink.