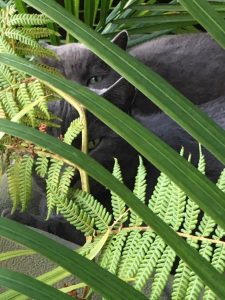 I photographed these two feral cats snuggling together to keep warm one chilly afternoon and I wondered, are they siblings? I’ve seen the way littermates wrap themselves around each other when resting or sleeping. It’s adorable. The two sister kittens next door (now around seven months old) often curl up with one another to sleep. The only two cats I’ve ever had that would curl up together like this were sister and brother. They were both grey-and-white and you couldn’t tell where one cat ended and the other one began. 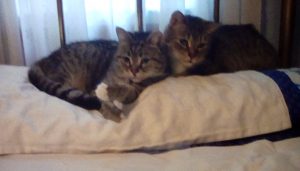 together, but it wasn’t because they loved each other. Lily came into our household as a kitten when Max was around twelve. He still had a lot of feral fears and he’d hide when we had company or workers around the house. Lily evidently thought that was a good idea and she began following his lead whenever she 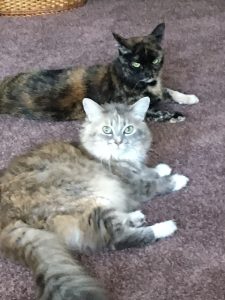 felt frightened and Max let her. I’d find those two together laying quietly side-by-side under the covers. That was the closest any of my non-related cats ever came to a cuddle.

I began to wonder if cats tend to snuggle only with those cats they’ve known since birth—their mother and their littermates. Then I thought about all of those videos and photographs shared on the Internet showing cats sleeping curled up with dogs, with other cats, and with their humans, of course. And what about the big old snarly male cat that was rescued from the streets at an advanced age and became a surrogate mother/father figure for frightened kittens. There are many photos of Mason (aka Grandpa) curled up protectively with abandoned kittens. I’m sure this isn’t an isolated case.

Do your cats snuggle together with each other? While Sophie and Lily seem to like having each other around and they play together almost every evening and they lay together in sun puddles in the morning, they have separate sleeping habits and separate beds. That’s just the way it is in our house.