Thoughts for Thursday – Will You See the Movie, “Cats?” 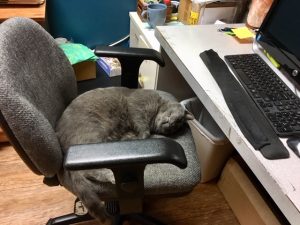 I’ve been telling you about the coming of the movie “Cats.” And I’ve been eagerly awaiting the movie myself. I wanted to compare it to the musical. I was curious as to how they’d handle the movie version. I think many of you were too.

Well another cat-adoring friend and I made a date to see it and we did—one rainy afternoon just before Christmas. We walked into the relatively small theater (among eight or nine other theaters, I would guess) and settled down into a full-blown, roomy recliner chair. Oops, I hadn’t slept well that night. I was concerned—would I fall asleep during the movie? Gosh it was comfortable. 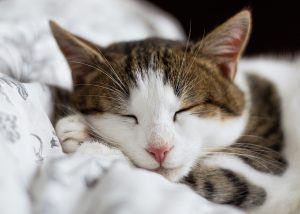 previews (some I would like to see—others I was insulted or appalled by), the movie finally started.

Now keep in mind that they’d just sent theaters an updated version of the movie that very day. Those with technological abilities would play the new version on that Sunday, those without wouldn’t receive it until the following Tuesday. We asked, but no one knew whether we were seeing the new version or the original. The problem was evidently with the graphics. 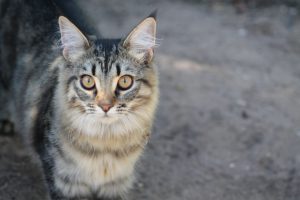 My friend and I had seen the musical “Cats” together in Santa Barbara five or six years ago. Now we sat in delicious recliner chairs in a beautiful theater with only six or eight rows of seats eager to see the much talked about and criticized movie. I have to tell you, the two of us sat mesmerized for the next nearly two hours watching this fascinating adaption and listening to the great soundtrack without falling asleep, without feeling a sense of boredom, without thinking about the drive home in the rain, without going over our grocery list in our head.

As I’d done during the musical, I wept for the beloved cats I’ve lost toward the end when 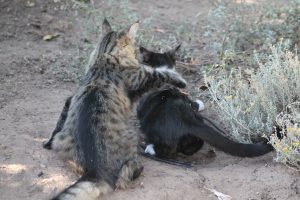 they sang the haunting “Memory” song. And when it was all over, I looked at my friend and said an exuberant, “I liked it!!!”

I waited for her response. She said, “I LOVED it.” As the two of us continued to sit in contemplation, another woman walked slowing down the steps toward the exit. She stopped and said, “My grandson said I should see this—I don’t know why, but I’m awfully glad I did. It was wonderful.”

There you have our reviews—our reaction to “Cats” the movie. How and why it is getting such bad reviews I cannot figure out. People pretending to be animals may be off-putting to some. Is that the whole thing? I’ve seen written some of the critical reviews, but I’m still not clear as to why the movie got such a bashing. It sounds personal—some people were offended, by what? I don’t rightly know.

Would love your input.

This entry was posted in Artists and Cats, Cat Stories. Bookmark the permalink.