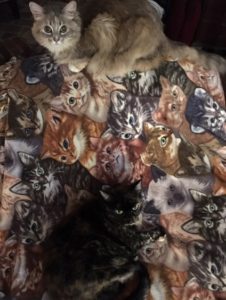 You may have read my posts expressing my excitement about the movie Cats, which will be released later this year. The target date is December 20. Staring will be some familiar names, but you probably won’t recognize the actors as they’ll be costumed to look like cats. Judi Dench is in this production as is Jennifer Hudson, Taylor Swift, Ian McKellon and others.

Here’s an interesting tidbit about this flick. The cats in the movie will be cat-size. How can that be? Evidently they’ll create everything around the cat actors large, so the cats appear to be your typical eight-pound (or so) cats.

Have you seen the play? Have you heard the music from the production? Do you plan to see the movie? I’m certainly going to get in line for a ticket. I might even wear my cat ears.