Newsday Tuesday – Animals That Care About Other Animals 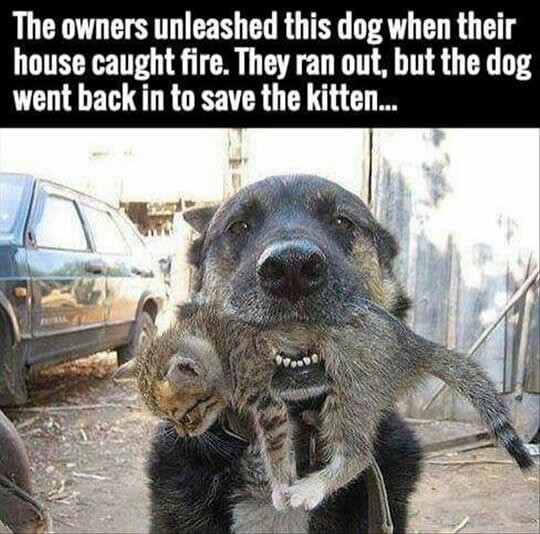 There are a lot of stories still surfacing about animals being saved from some of the horrendous California fires recently. In fact, this has spurred a rash of older stories of people saving their pets, animals saving animals, and all variety of animal rescue and survival. There are a few that stick in my mind.

I love the story of the cat who was so grateful to the firefighter who rescued him that he literally clung to him. There are pictures of Foster (the cat) riding on the shoulder of the firefighter who saved him. Foster was singed, but he’ll be okay. Often firefighters and other rescuers will make a home for the abandoned animals they find in disaster situations.

I also like the story of the dog who evidently went back into a burning house to save the family’s kitten. This is the picture that touched my heart. (Whether it’s real or not, who knows. It’s the Internet.)

But there are some true stories of animals helping animals in dire situations that I’d like to share. In Australia, a family dog refused to leave a litter of kittens and had to be rescued. They found her lying unconscious next to the kittens. As I understand it, all of them were revived.

Here are two stories involving mother cats and their kittens. One mother cat in Colorado got caught in a fire with her kittens and she had the wherewithal to move them into a room in the back of the house, away from the fire, tuck them into an alcove and shield them with her body. All were saved.

The most famous of heroic cats is a story out of Brooklyn in 1996. Scarlett, a street cat, entered a burning building five times to rescue her five kittens. She was seriously scarred by the burns she received, but she was adopted and was cherished as a housecat for the rest of her life. All but one of her kittens survived the ordeal.