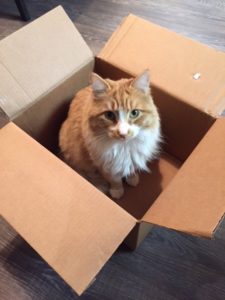 What’s up with a cat’s fascination with boxes? Does your cat get excited when the UPS truck shows up and a box appears on the porch? It seems that she’s eager to see what’s inside the box, but no. As soon as you open it and remove the contents, what happens? In our household, Lily chews on the tape until I remove it and throw it away. She has a fascination for tape. In the meantime, Sophie walks around the empty box, sniffing it, looking it over, examining it. Then both of them (or one, if the box is small) will jump into the box and sit there for a while. Sometimes we’ll cut windows and doors in a large box and turn it upside down for the cats to go in and out of. They often engage in a game of patty-cake through the openings in the box— 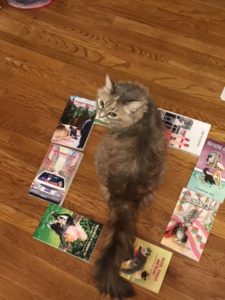 Have you ever laid pieces of tape in a square on the carpet or bare floor and watched what your cats do? Here, Lily will try to chew on the tape, but eventually she step inside the square. Sophie will take her turn in the square—often lying down in there and taking a bath. You can actually create a square or circle from any object. Here, I did so with some of my books. As soon as Lily saw it, she stepped inside. 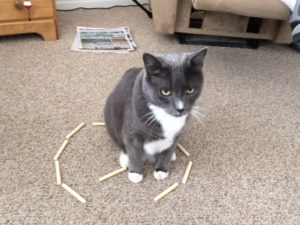 A couple of days ago I decided to see if my mother’s cat, Smokey (aka Rags in my Klepto Cat Mysteries) would do what most cats do when there’s the outline of a box on the floor. That is, to get inside the square or circle. First, I made a circle out of pieces of chalk–well, that’s what was handy. He ignored it for as long as he could–acting cool. Then he ambled over to the intriguing circle and began playing with the chalk, finally sitting down in the center of the chalk. When he walked away, I picked up the chalk and made a larger circle on the floor with his toys. This really got his attention. He rushed to the circle of toys and began picking a toy up and shaking it, then he’d drop it and pick up another toy, until he’d completely misshapen the circle. He seemed rather agitated until I returned his toys to the basket. Then he left the room. I don’t think he appreciates being laughed at. But we

When your cat sits or sprawls in a box you probably do what we do and take a picture. There’s just something amusing about a cat in a box. Here’s a site with a gallery of photos showing cats in boxes. Enjoy!  https://www.huffingtonpost.com/entry/cats-boxes-simons-cat-logic_us_5740653be4b00e09e89f3975

This entry was posted in About Cats, Funny Cats. Bookmark the permalink.