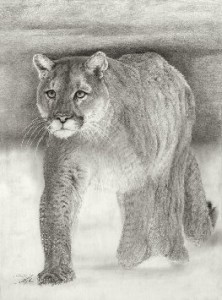 For years, experts have thought and reported that the cougar (puma, mountain lion) is a loner. I attended a program recently during which the commentator said that once a cougar is old enough to leave his mother, he needs an extraordinary number of acres of his own in order to survive—some were saying fifty to one-hundred square miles. And it was thought that the cougar survived alone, shunning contact with other cats except during mating season. In recent months, however, they’ve discovered that this big cat is more social than they thought. He shares meals with others of his species and actually hangs out with them among the brush and boulders. Here’s the new report that, I’m sure will lead to many others. It’s really cool to know that we’re finally getting a more realistic view of the elusive mountain lion.

Here’s a good article about this large cat’s lifestyle. He’s actually a pretty interesting guy. But I guess we can disregard the mention of his behavior as a loner. http://wdfw.wa.gov/living/cougars.html This article even includes information about how to stay safe while hiking or camping in cougar country.

This entry was posted in About Cats, Artists and Cats, Exotic Cats. Bookmark the permalink.