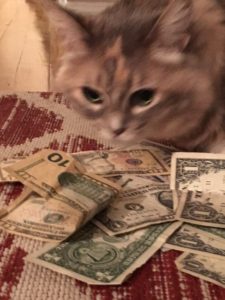 Have you heard about Cashnip Kitty who spends his days raising money for the homeless. He raises a few smiles in the process. You see, he’s an office cat for a marketing firm in Tulsa, OK. Evidently, he enjoys sitting at the glass doors of his office building and people-watching. One day the owner walked into the foyer and noticed the cat sitting on a pile of dollar bills. He discovered that people, seeing the cat, would entice him by slipping a bill through the slot between the doors and the cat would take it. So the owner of the firm put up a sign saying, if the cat takes your dollar, we’ll donate it to the homeless.

Some people were hoping the money would go to homeless cats. But it’s a worthwhile project nonetheless and Cashnip is having fun and getting exercise along the way. Here’s a video of Cashnip (Aka Sir Whine’s A lot) at work. http://www.khq.com/story/36386324/this-cat-is-raising-money-for-the-homeless-in-tulsa

Jerry, an 18-pound cat in Bushwick, NY has raised over $20,000 for hurricane victims this year. He’s evidently kind of a silly cat—“a character of a cat,” they say. And his owner takes a lot of pictures of him. People enjoy the photos, so she came up with the idea of selling his pictures—the proceeds going to hurricane victims. She’s sent over 300 photos out so far. http://nypost.com/2017/09/02/this-woman-is-using-her-goofy-cat-to-raise-money-for-harvey-aid/