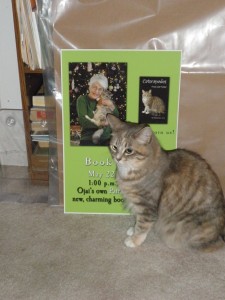 Lily posing with our poster

Lily and I are looking forward to our debut book signing at Noah’s Apothecary in Ojai, CA Saturday, May 22 from 1-3 pm. I thought about taking Lily with me—she is a great ambassador for the book. But I decided that she is better off at home where it is quiet, there are no nosey dogs and people aren’t poking their fingers into her pen trying to touch her soft plush fur.

So I’ll be going it alone at the signing table greeting guests and talking about Catscapades, True Cat Tales, which includes stories about our newest addition, Lily, as well as many other cats.

A lot is happening fairly quickly with this book. Steve Dale featured it recently in his column, which seems to be syndicated everywhere—I’ve seen it in a St. Louis newspaper, one in San Diego; and another one in Gainesville, Florida, so far. The book is displayed at several pet and cat-related sites. The latest is Flippy’s site in Melbourne, Australia.

I’m getting orders and so are Amazon and Barnes and Noble. Oh yes, I notice that the stores downtown that have the book for sale are also selling copies.

I sold all the copies I had with me at a recent mini-class reunion—we call it the Old Broads’ Gathering. Several former classmates had their own cat stories. I’m collecting stories for the sequel—so send me yours, too. PLFry620@yhaoo.com

Lily is old enough now to have her booster shots and we’ve scheduled an appointment. She had such an awful reaction the last time we had shots, that I am going to request the antidote—which I believe is something on the order of Benedril—for allergic reactions. We used to request it for Winfield, our white odd-eye cat because his first experience with kitten shots was just awful. He was really, really sick. We had to rush him back to the veterinarian immediately upon returning home for a second shot and, still, he was sick, not eating, had a high temperature and seemed to be extremely sore to the touch for about 24 or 48 hours afterward. The vet assured us that if we had the antidote with the shots, he would not have another severe reaction. And this was true for the rest of his life.

Winfield died of cancer of the throat/mouth at the age of 14. That’s Winfield at the top of this blog page above little Lily’s picture.

Can’t make the signing? Order your book at http://www.matilijapress.com/catscapades.html

This entry was posted in Announcement. Bookmark the permalink.