Newsday Tuesday–Get to Know the Voice Behind the Audiobook

As you know, I’ve been excitedly telling you about my new audio book. A lot of people have told me over the last four years that they’d love to read my Klepto Cat Mystery series, but they just don’t have time to read. They listen to books while working out, commuting, vacationing, and so forth. So this year I revised Book One in the series—Catnapped. Why? Well, I think I’ve learned a lot about writing fiction after 23 books and I just felt as though it needed to be brought up to snuff. Then I found Dena Dahilig, who does marvelous voiceover work. And together, we produced Catnapped as an audio book. 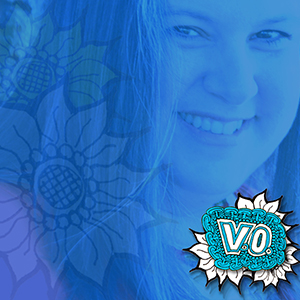 I thought you might enjoy meeting Dena, so I interviewed her for this blog. Here’s the interview, a picture of Dena’s home recording studio, and an adorable shot of her cat, Stanley. (Stanley actually has a part in the Catnapped story. Listen for him.)

Q: Dena, welcome. What would you like to say about the process of doing audio for Catnapped?

A: Well, first of all… hellooooooo! It was definitely a learning process for me! Most of the work I’m hired for as a voice actor is in the commercial television/radio realm. Commercials usually top out at 30-60 seconds, so recording a 7-hour book required a completely different toolbox… and a fair amount of organization! Although I regularly do several “long-form” non-fiction recordings, working with characters is an incredibly rewarding challenge.

As the process began, I realized right out of the gate that this is Book One! I mean, that’s obvious, right? But the full reality of what “One” means hit me! This is Book One of twenty three! And counting! That means that Patricia is sowing the seeds of multiple books in this first volume.

There are lots of questions to be asked of any book: Where are we? What is this world like? 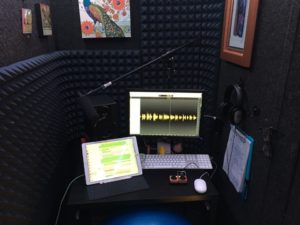 Who lives here and who are the outsiders? What are the significant relationships? etc.

With a series, I had to go further: Which of the 40+ characters are recurring? Which become lead characters in future volumes? And, of course… what’s with all the cats?!?!?!

I started by reading the book, of course… building up a basic familiarity with it. Then I charted out each chapter, scene, location and character as they occur. Finally, I annotated the entire script. For this I use a piece of software called iAnnotate for the iPad and iPhone. I import the script into the software then start bookmarking chapters, noting where each character first appears, and creating a palette of colors to identify who is who. Each of the 40 characters was assigned a distinct highlight color that was easy to identify at a glance. Yellow? Savannah. Lime Green? Aunt Margaret? A slightly-sexy burnt umber? Why, Dr. Michael Ivey, of course!

I don’t consider myself an expert at “voices” in the animation/cartoon/video game sense, but voicing characters in a novel does require a clear distinction to be made, and these distinctions can’t be arbitrary. So to begin to create clarity, I look for clues. Let’s take a quick look at Margaret, for instance.

This is part one of Dena’s interview. Tomorrow, she talks about Margaret’s character and the process of how she found Margaret’s voice. She’ll also reveal her cat, Stanley’s, part in the recording. Don’t miss it the next segment of Dena Dahilig’s interview.

This entry was posted in Artists and Cats. Bookmark the permalink.