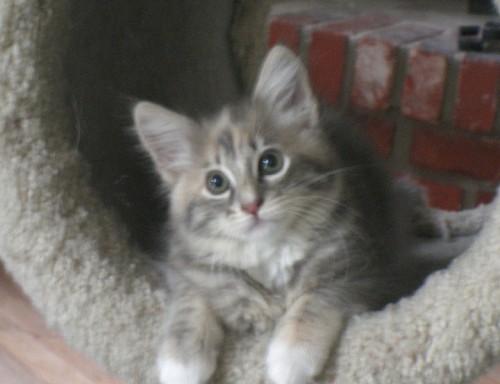 I’ve been asked to share a story or two from my new book, Catscapades, True Cat Tales. Here’s one from the long-ago past. I hope you enjoy it as much as I enjoy remembering Gus, Molly and the incident.

Gus was an ordinary gray and white male cat with an extraordinary heart. In the early years of my adult infatuation with cats and, while I was raising small children, I was not quick to get my cats spayed and neutered. Thus, I experienced the joy of a few litters of kittens. We raised Gus and his sister, Molly from PomPom’s second (and last) litter. Before long, Molly had kittens of her own.

Molly was an incredible mother. In fact, I didn’t see her leave the birthing box for days after the kittens were born and I wasn’t able to coax her out. So I carried food and water to her. Maybe she’s slipping out at night to use the sandbox and stretch her legs when we’re asleep, I thought.

On the third morning, as I sat next to the box stroking Molly and her babies, I crooned, “You’re such a devoted mommy. You’re taking such good care of your kittens. But you need to take care of yourself, too. Get out and move around a little. Your babies will be okay.” Molly just purred and licked one of her kittens so hard that he rolled over on his back. He reminded me of a tortoise for a few seconds as he clumsily tried to right himself. I reached down and nudged the chubby body until he was in nursing position again. I was still chuckling as I walked over to make the bed.

Suddenly, Gus walked into the room. His pace was deliberate—as if he was on a mission. Of course, I’d heard about male cats harming kittens and I became concerned. But Gus and Molly were so close—surely he wouldn’t hurt the babies. In fact, I kept both of these kittens because of their obvious devotion to one another. They were inseparable. When one was sleeping, they were both sleeping curled up in a gray and white circle of fur—always together. When one was outside, the other was always nearby. This was the longest period I’d ever seen them apart. And now here he came. I wanted to stop him. Don’t get any closer, I thought. Danger! Danger! Frightening thoughts filled my head.

I looked over at Molly. She seemed unconcerned. And then something happened—something I would never imagine—something I’ve never witnessed before or since.

Molly stepped out of the birthing box and Gus stepped in. I watched in astonishment as Molly walked calmly out of the room. I looked back over at Gus. To my amazement, there he sat arrow straight and upright staring into space—ears slanted slightly outward, eyes only partially open, a look of disgust and disdain on his whiskered face. He sat like a statue seemingly ignoring the motion at his feet as four newborn kittens squirmed and rolled around him.

A good ten minutes later, Molly reappeared in the doorway. Gus spotted her and leapt out of the box. He walked swiftly past her without so much as a “howdy do.” In fact, his demeanor was more as if to say, “You owe me one, kid—you owe me BIG.” And as far as I know, that was the first and last time that Gus ever agreed to be the babysitter.

Catscapades Table of Contents
View the full Table of Contents for Catscapades, True Cat Tales in the March 1, 2010 blog. I believe you will agree that there are stories for every cat person. There are stories of feral cats, colony cats, pampered cats, cats in danger, seriously injured cats, orphaned cats and even a cat that was catnapped. You’ll learn more about communication in cats, cat safety, things cats can teach you, using mind-talk with cats and there’s also the story of a woman who feels that she attracted cats that wanted help crossing over.

Order your copy of this charming book of true cat stories here: http://www.matilijapress.com/catscapades.html.