Where Do Cats Live? 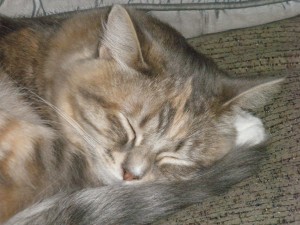 Lily Happy in Her Home

There are fortunate and unfortunate cats—the fortunate ones live in comfort with people who adore and pamper them. The less fortunate cats live under bushes, in drafty barns, under houses, in smelly alleys and so forth. I met a cat yesterday who lives on a boat.

No, the boat is not a luxury liner or even a houseboat docked nearby. This is a small, one-man fishing boat that is parked on a trailer along a neighborhood street. The scrawny black and white cat seems to spend most of his time sleeping on top of the outboard motor. The first few times I saw the cat, I thought, “How cute—a cat in a boat.” Later, when I noticed a paper plate with a few kibbles sitting on the bow, I knew—someone is feeding this stray who has chosen to live what few years the old guy might have left on this old, abandoned boat.

This cat came along too late to be featured in my book of cat stories, Catscapades, True Cat Tales. But there are stories of cats in unusual living conditions. I write about Pebbles, for example, who had a perfectly fine home with loving people, but who chose to wander down the nearby ravine to join a cat colony that gathered several blocks away. It took her people a while to figure out where Pebbles was going every day. Eventually, they learned that, although she was sleeping in her cozy bed by night, she was hanging out with the colony by day.

Lily was born in an abandoned Volkswagen and experienced her first six weeks sharing an attic with 14 other kittens. Alma and her kittens live in an overgrowth of ice plant in a San Diego cat colony. Bootsie tired of living in a barn and moved into a neighbor’s home. Her story is interesting because, unbeknownst to Bootsie’s new “person,” she gave her the same name as she had when she was a barn cat. Max was raised in a woodpile until we rescued him and his sisters. And then there were the four aging cats that were orphaned when their young “person” died unexpectedly and who each had to adjust to new surroundings. This is a story of divine intervention.

All of these stories and more are featured in Catscapades, True Cat Tales. http://www.matilijapress.com/catscapades.html. Order your copy now for Mother’s Day giving.