October is black cat month. Do you know why? So that every administrator for every shelter, every owner of a black cat, and every citizen who knows of a stray black cat will be aware of the dangers for these cats during Halloween. Yes, there are still people in this day and age who follow some of the sick ancient rituals of sacrificing or torturing cats at this time of year—most particularly black cats.

You don’t believe that black cats still carry the stigma from the 17th century? Whether it is because of the black cat’s perceived connection to witchcraft or something else, black cats are the most commonly euthanized in most shelters where they still kill unwanted cats. There are definitely prejudices against black cats even in America today. 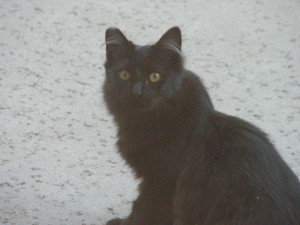 sight at night for their child. Elderly people are legitimately concerned about trying to navigate through a dimly lit house at night with a trusting black cat underfoot because they’re more difficult to see. Some people simply think a black cat has an evil look about it. And then there is the good-luck/bad-luck issue.

Here in America, if a black cat crosses your path, it’s considered bad luck. However, a black cat in Japan is considered good luck. In the British Isle, a black cat in the home is thought to bring affluence. As most people know, in ancient Egypt, cats were worshipped. They’re still honored to the degree that they’re allowed to run free all over the city.

During the month of October, extra precautions are taken to protect the mystifying black cat. Most, if not all, shelters will not adopt out a black cat in October. And one reason is fashion. Evidently some Halloween enthusiasts will adopt a black cat simply to use as part of their Halloween costume or as a decoration at their Halloween party, only to return it after the party or turn it loose to fend for itself. And, as I mentioned earlier, there are still people who will use a cat—most often a black cat—in sick rituals this time of year.

It is recommended that all cats be kept inside during the Halloween trick-or-treat activity and, for the most skittish, close them in an interior room away from the hustle bustle of noisy visitors.

If you have a black cat or know of one in your neighborhood, take the initiative to protect that cat throughout the October celebrations.