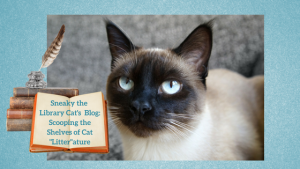 Meow, there. It’s Sneaky from the Cobble Cove mysteries dropping in to visit my friends at Catscapades. I recently interviewed Rags from the great Klepto Cat series for my new blog at https://sneakylibrarycat.wordpress.com/. I am still on the prowl for new guests, so if any of you cat characters out there would like to be interviewed, please ask your author to send an email to me at sneakylibrarycat@gmail.com. I also welcome guest posts from real life cats as long as they are of interest to cats and their humans.

As a library cat, my main pawcus is litter-ature, so if your author or reader has any cat-related news or reviews, please send them my way. Although my author, Debbie, transcribes my writing, I assure you she makes no changes without my purrmission.

Since Debbie’s next book is coming out on October 12th, I thought I’d include an enticing 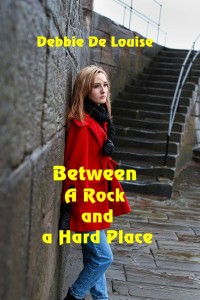 kibble bit about it with an excerpt in which I star. If you haven’t read the first book, A Stone’s Throw, I would recommend you do that, although both books can be read as standalones. In the first mystery, you learn how I ended up being the Cobble Cove library cat, and I help the main human character, Alicia, find a very important clue in the library.

Here is an excerpt from book 2:

This is where I am the center of attraction during a Cobble Cove library story time:

Laura opened the staff lounge, and Alicia followed her in flicking up the light switch next to the door. The room into which they walked was cozy with a few tables covered by red and green holiday tablecloths that Vera had recently purchased in town, and chairs similar to the one in Sheila’s office that she’d promised to replace soon with padded ones. There was a small refrigerator and a counter with coffee maker, mugs, and sweeteners.

Laura continued through the room to the back door framed by a cat flap. She put her finger to her lips.

“Shhh. He might be sleeping. That would be great. We can catch him unaware.”

She opened the door slowly and tiptoed through. Alicia followed on her toes, as well, the squeals from downstairs reaching a crescendo as the two women entered the storage/cat room.

Sneaky was indeed sleeping, nestled into the cat bed they’d moved from under the local history collection downstairs; but, like most felines, he was alert to the slightest noise. As Laura and Alicia entered the room, one brown ear flap lifted and Sneaky’s left eye opened a slit.

“Uh, oh. He’s heard us.” Laura bent down and unlocked the top and bottom hinges of the cat carrier. Sneaky, hearing the familiar sound, jumped up from his bed.

“Oh, no you don’t, Mr. Sneak,” Laura said. She signaled to Alicia to block the exit as she ran across the room and scooped Sneaky up in her arms in one fell swoop. Then, rushing back to the carrier, she pushed him in and secured all four hinges that closed the door.

“Amazing,” Alicia said. “You’re such an expert at catching cats. I had one before I married my first husband, and my mom and I always had such a difficult time getting him to the vet. We had to close all the rooms in our house, and he would still run under the couch.”

Laura laughed. “I’ve had lots of practice. I grew up with a house full of kitties, and I’ve also done animal rescue. Mr. Sneak is no match for me.”

She picked up the case as Sneaky began to meow, his bellows mixing with the children’s wails from below. “Let’s get going before some of those kids start throwing up from excitement.”

Alicia, abandoning her guard post by the door, followed Laura and the caged cat down to the Children’s Room. Parents, mostly mothers and a few fathers, were lined up around the room as their children, ranging in age from two to five, sat in a circle Indian-style around a chair. Jean was handling crowd control and had selected and arranged some picture books on a cart next to Laura’s seat.

As soon as Laura entered the room carrying Sneaky, the group went wild. Jean, assisted by some of the parents, had to restrain the children from opening the cat carrier. Sneaky had quieted down but had scuttled to the back of the box. Alicia knew it would be difficult to extract him until the noise level dissipated.

Laura excused herself as she carried Sneaky to her reading chair and placed the carrier beside it. She put a finger to her lips in the stereotypical librarian “shushing” gesture.

“Quiet down, children. Sneaky will be too frightened to come out if you are too loud.”

Alicia noticed Walter on the other side of the room. He was ready to clean up any mess the cat or the kids might make. Donald and Vera were also looking on from the sidelines, ready to return to their posts at Reference or Circulation if any patron needed them. Alicia was surprised Sheila wasn’t there, as she usually attended all library programs. She wondered what the director was working on that might be so important.

Laura sat in the center chair.

“Okay, kids. If this is your first time at Sneaky Storytime, let me go over the rules. I have a few books to share with you this morning. After I read them, I will allow you to come up, one at a time, to pet Sneaky on my lap. You will have to be very quiet, or he will run away.” She looked toward Walter who took his cue and drew the room dividing panels closed. Since the panels were opaque, Donald and Vera could still keep watch on the front desk.

“One other announcement before we begin,” Laura continued. “Sneaky is also having a special guest today. He will be joining us in just a few minutes.”

This was a surprise to Alicia. Who could be the cat’s special guest? Laura’s words were met with claps and yaaays from the kids.

Too bad my guest ends up stealing my limelight, but you have to read the book to find out who he is.

I guess I should also mention that I am modelled after one of Debbie’s cats, Oliver, a 16-year old Siamese. I am a younger version of him with more acting and writing experience.

I hope you will buy my author’s books, so she can afford to spoil her two cats in the manner in which they are accustomed. Debbie also has plans to continue the Cobble Cove mysteries, and I have requested that she give me more fur-raising scenes. Because I share the books with Fido, a golden retriever and a few pets that make cameo appearances, I have to “litter”ly beg for my parts.

So here are the links to these pawsome books: Cobble Cove Book 1: A Stone’s Throw myBook.to/StonesThrow; Book 2: Between a Rock and a Hard Place myBook.to/CobbleCove2

These are my author’s social media links:

This entry was posted in Guest Blogger, Uncategorized. Bookmark the permalink.