Mindful Monday – No Chocolate for Cats 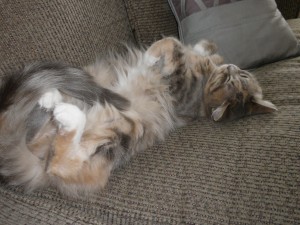 The Party is Over

Are you aware that chocolate is toxic to cats? But why would a cat nibble on chocolate, anyway? Cats don’t generally have a sweet tooth. They are, however, curious and sometimes bored and prone to experimentation.

Typically, we wouldn’t expect a cat to jump on the counter or the table and devour anything but maybe a turkey sandwich, leftover bacon, or the milk left in your cereal bowl. A cat would surely dive into a dish of vanilla ice cream or yogurt. But chocolate? Oh yes.

One night a friend brought her decadent chocolate frosted brownies to share. After everyone left and we had retired, I remembered that I had not covered the remaining brownies. When I entered the kitchen, however, I was shocked to see our Himalayan, Katy, on the table, helping herself to the brownies. She was actually licking the frosting. Yikes! That’s the first time I’d ever heard of a cat wanting to eat chocolate. And upon further research, that’s when I learned that chocolate is a definite no-no for cats.

According to experts, chocolate can cause, among other things, seizures, coma, and death. In fact, the chocolate considered best for people—dark chocolate—is one of the chocolates highest in the toxins that are dangerous for cats.

So folks, keep chocolate away from your cats and dogs. A kitten or puppy might be attracted to the shiny wrapping on dark chocolate kisses, for example. Your half-eaten candy bar may be of interest to a curious cat or dog. And any pet who is attached to you and who wants to be where you are and share what you have, could be a sitting duck for poison by chocolate, particularly if you are a choco-holic.