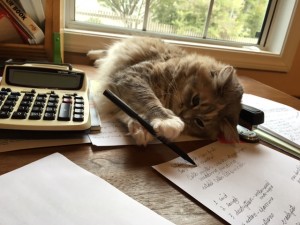 How do I approach my stories? Sometimes I have a basic idea of the story I want to tell—maybe I’ve chosen the setting or the characters who will be involved and a basic plot. But for the most part, I simply sit down and start writing. I like to begin with a stunning event—something that will get the reader’s attention and, hopefully, make him or her want to keep reading and find out what it was the cats saw outside the window that frightened them so badly, why Savannah had such a crazy nightmare, how in the world it happened that the cat was floating around the lake on top of a dead body, who was causing havoc in the neighborhood, etc.

From there I just write, making up the story as I go along. Sometimes it feels as though the 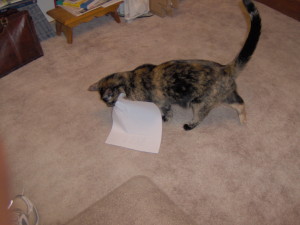 story is driving me instead of the other way around. I often tell people I want to get back to my writing and find out what happens next. Most often, I truly don’t know where the story will take me.

I finish my stories maybe fifty times. I haven’t actually counted how many times I re-read and rewrite and edit and proof…Then there’s the fact-checking—to identify the tool they used to crack open the old freezer, to locate the correct term for an item or procedure, to make sure I’ve accurately represented a period in history or a famous person, etc. I have to make certain the time-line is correct. If I say in the story that something happened a week later, it had better be a week to the day. And I need to make corrections in cases where, for example, Michael mentions his conversation with Luke in chapter three, but he didn’t actually meet Luke until chapter 5. If Aunt Margaret doesn’t learn of Savannah’s near accident in chapter four, she’d better not be talking about it in chapter 2.

It is around this time that I contact my cover designer with the title of the book and the premise, with some ideas for a design. She takes it from there.

Once I’m satisfied with the flow and order of the story, I edit for word choices, overused phrases, etc. And I spend time gussying up some of the dialogue, narration, and description. 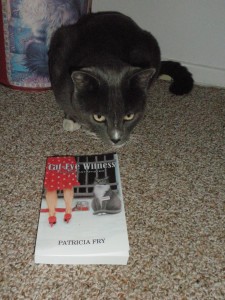 Then it goes to the person who does the formatting for Kindle—quite a process I haven’t learned to do and don’t want to. I have more stories to write, after all. I give her the cover at this time and a description of the story. One to three weeks later, the Kindle version of the book is available at amazon.com.

We prepare the book for print here in-house. To date, we have 15 of the books in print form and are striving to catch up so that we’re producing the Kindle version alongside the print version. Our goal is to accomplish that this year.

In the Klepto Cat Mystery factory, we average a book every 2 months and have since the first one, Catnapped, came out in June of 2013. That’s over five books per year.

People ask how is it I’m so prolific. When do I find time to do so much writing? Well, even after 43 years of writing for publication, I still haven’t tired of the process. The truth is, all I want to do is write and I indulge myself as often as possible—which is generally every single day of the week for at least eight hours and frequently more.

Do I see an end to the Klepto Cat Mystery series? No. But I have toyed with the idea of writing an unrelated novel. No immediate plans, yet. I suspect that I won’t let my mind and heart stray from this series until after we’ve produced book 20.