Mindful Monday–Meet Some of the Stars 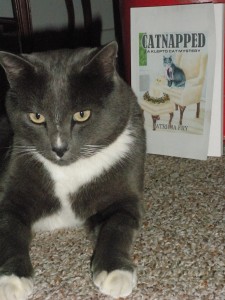 Today, I’d like to introduce you to some of the cat characters in my Klepto Cat Mystery stories. Rags (Ragsdale) is the star. A striking grey-and-white boy, he was adopted from a shelter in Los Angeles and was purported to be part ragdoll. He doesn’t look like his alleged ancestors, but he does have a few ragdoll characteristics. For example, he’s a large cat and he does love to sprawl and loll. He’s extremely inquisitive and adventurous, which helps to inspire and fuel my stories. His main quirky habit is, he steals things. Certainly Rags doesn’t consider it thievery—he simply spots trinkets, notes, clothing items, etc. that interest him and he takes them—often carrying them up the stairs in their old farm house, dropping them into his stash—a box in a closet. Sometimes the things he “finds” are clues in the current mystery.

Rags has a lot of friends. He bonds easily with other cats as well as dogs and even one 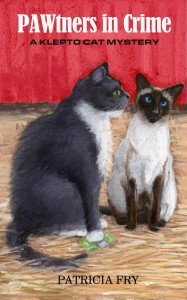 particular horse named Peaches. He once saved a lost Himalayan by keeping her warm all night. He and Dolly, a sweet tabby, sometimes team up to cause havoc or make an important discovery. Rags partnered with a Siamese named Koko in a couple of the Klepto Cat stories. This was quite a pair. What one didn’t think of, the other one did. Rags met this interesting feline in the belly of a mansion.

The cats in these stories are partly figments of my imagination, and partly inspired by cats that I know and have known. Rags, for example, is patterned after my mother’s cat, Smokey. But his klepto habits are inspired by my tabby, Lily. I’ve also reached into my memory bank of cats in my past to develop this and other cat characters for my stories.

If you like to read stories with cats, dogs, and horses, pick up one of the Klepto Cat Mysteries and get to know Rags and his friends. There are now 16 books formatted for your Kindle and 13 of them are also in print. http://amzn.to/1kAI8I2 or http://www.matilijapress.com