I love Wednesdays when anything goes here. I’ve been wanting to share some of the funny pictures I’ve taken of Lily. Here’s my opportunity. 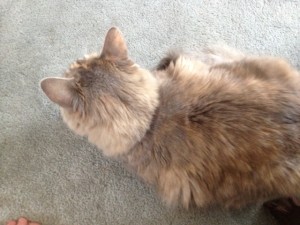 I’ve always referred to Lily as my little angel. One evening as she lay at my feet, I looked down and realized she actually has angel wings. I guess we didn’t have to outfit her with those pink wings after all when she auditioned for the part of Tinkerbell in a virtual kitty rendition of Peter Pan.

rolled herself up in a section of newspaper like a burrito. She was wrapped up so tightly she could not move a paw. And the more she’d roll, the more tightly wrapped she became. Before I could think to grab my camera, she began to look a little panicked. So of course, I tried to stop laughing and quickly rescued her. 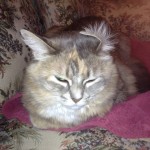 Lily has the softest little kitten ears I’ve ever seen on a cat. When she takes her bath, she sometimes flips them back like this. My grown grandson and his girl, Marty and Veronica, have a little black Kinkalow kitten. They call him Bruce Wayne. His ears are naturally curled. Once, when Lily had bent her ear back like this, I sent Marty and Veronica a picture saying “Lily is trying to impersonate little Brucie kitty.”

Lily loves water. Well, I’ve never tried to give her a bath, but she doesn’t seem to mind having water splash all over her face while she takes a drink. 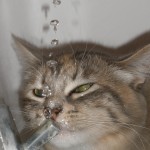 Lily, like most cats, can get in some interesting positions. Here’s 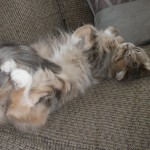 The Party is Over

one I caught her in the other day. 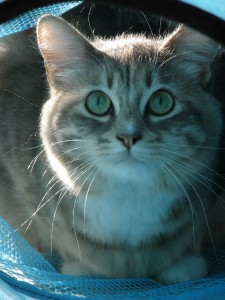 I promised Lily I would publish one of her glamour photos along with all of these funny ones. Here’s one of my favorites.

Would love to have you share some of your silly kitty pictures—but I won’t publish them without your cat’s permission.

For more cat pictures and an array of true cat stories (some heartwarming, some funny, some quite unusual), order your autographed copy of Catscapades. http://www.matilijapress.com/catscapades.html

This entry was posted in Funny Cats. Bookmark the permalink.